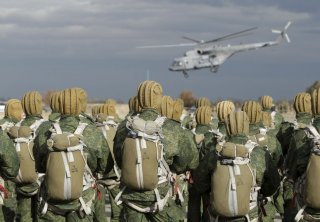 Paratroopers are usually thought of as being a lightly armed strike force that jumps deep into enemy territory with only what they can carry. However, the Russian Army’s paratrooper force combines mobility with some heavy hitting armored power.

“Under the state armament program, the Pskov Guards Air Assault Division will receive a battalion set of next-generation BMD-4M combat hardware in June that includes about 40 BMD-4M airborne infantry fighting vehicles and BTR-MDM ‘Rakushka’ armored personnel carriers,” the Russian Defense Ministry told state media this week. “This is the eighth battalion set of combat hardware arriving for the Airborne Force.”

The ministry added that the combat vehicles’ crews had underwent two months of training at the 242nd Training Center in the city of Omsk, which is used in preparing Airborne Force junior specialists. Now that the training has been completed, the new hardware will be handed over in a special ceremony to be conducted later this month.

In total the Russian Airborne Force will receive more than 400 items of new and upgraded armament by the end of this year.

The fact that the Russian paratroopers are also an armored force is not a new development. During the 1970s the Soviet military had developed a fleet of armored vehicles that could be dropped out of airplanes. Some of these vehicles even saw use in Afghanistan.

While these vehicles aren’t anywhere near as heavy hitting as a main battle tank (MBT), the BMD-4M and BTR-MDM provide the paratroopers with mobility and striking power once they’re on the ground. The 14-ton BMD-4M airborne infantry fighting vehicle has a crew of three including driver, gunner and commander, and it can also transport up to five additional soldiers.

It is armed with a 100mm cannon, which can also serve as a launcher for Arkan anti-tank missiles, while secondary armament includes a 30mm automatic gun and 7.62mm machine-gun. The BMD-4M carries an ammunition load of 34 rounds and four missiles along with 500 rounds for the 30mm gun. The vehicle has top speed of 70 km/h and can move in water at a maximum speed of 10 km/h.

The 13.2-ton BTR-MDM ‘Rakushka’ armored personnel carrier, which was developed at the Volgograd Tractor Factory, is armed with two machine-guns. It has a crew of two and carries up to 13 assault force personnel along with ammunition, spare parts, fuels and lubricants for Airborne Force and marine infantry units.

While the recent reports didn’t mention the Russian Sprut SDM1, an anti-tank vehicle that resembles a light tank, it is another vehicle that has been used with the Airborne Force. As The National Interest previously reported, “When Russia says airborne tank, it means airborne tank: Russia and the Soviet Union both drop their armored vehicles with their crews inside the vehicle.”

Currently the United States military has no comparable armored vehicles that are deployed by airdrops. The last American armored vehicle designed to be dropped out of an aircraft and deployed directly on the battlefield was the M551 Sheridan, which saw use in Vietnam. However, its thin armor and specialized ammunition—which proved too fragile—meant the light tank was relegated to training operations.

Russia’s 76th Guards Air Assault Division has a long and distinguished history. Set up in 1939, it is the oldest Airborne Force unit in the Russian military, but the history of Russian airborne forces dates back almost a decade earlier.

It was in August 1930 when 12 parachutists were dropped during maneuvers in the Moscow Military District—and prior training had consisted of just a handful of practice jumps. During the Second World War in January 1942, some 10,000 Soviet Red Army paratroopers were deployed behind enemy lines in sub-zero temperatures. It was the largest Soviet airborne operation of the war and one of the most daring paratrooper missions of the war. Moreover, while it didn’t go as planned, it still caused havoc for the Germans.