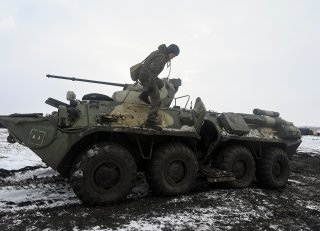 Russian president Vladimir Putin’s decision to recognize the two separatist governments of Ukraine’s eastern Donbas region, and the subsequent deployment of Russian “peacekeepers” led to renewed fears of a war between Russia and Ukraine on Monday. Some experts warned a potential Russia-Ukraine war would be the largest and deadliest conflict in Europe since 1945.

The announcement also led to an economic downturn within Russia. Putin’s recognition of the separatist territories led the Biden administration to impose a series of limited international sanctions against the country, with the promise of more to follow if a broader war began.

The Russian ruble, which usually trades at roughly seventy to the dollar, slipped up to eighty after the announcement was made, though it regained some value later in the day. The Russian stock market also saw significant individual drops, with the well-known RTS index fund down 13 percent. Shares of two Russian banks – Sberbank and VTB – also plunged by double digits in the aftermath of the announcement, and Russian oil giant Rosneft saw its share value decrease by 13 percent.

Although these changes are not likely to immediately affect average Russians, the ruble’s devaluation against other currencies, most notably including the U.S. dollar, will make it harder for Russians to purchase goods abroad in the long run. Further economic action by the West against Russia, along with counter-sanctions, could make imports far more costly or cut them off altogether.

Putin’s recognition of the Donetsk and Luhansk People’s Republics as independent nations violated the Minsk Protocols negotiated between Ukraine and the pro-Russian separatists. The decision also contradicted Russian ambassador Anatoly Antonov’s remarks on Sunday in which he “confirm[ed] that Donbas and Luhansk [are] a part of Ukraine.” It is widely believed that Russian recognition of Donetsk and Luhansk raises the stakes for a broader Russian invasion of Ukraine.

Russia has stationed about 150,000 of its troops along the Ukrainian border and an additional 30,000 within Belarus, bordering Ukraine to its north. Although the Russian troops were originally scheduled to leave Belarus at the conclusion of Russian military exercises there, Belarus’ defense ministry said this weekend that it would allow them to remain in the country indefinitely.

Kyiv, Ukraine’s capital, is less than one hundred miles from the Belarusian border.

To defuse the crisis, both Putin and President Joe Biden agreed “in principle” to an in-person meeting, although that announcement was made before the entry of Russian troops into the two separatist regions.

Secretary of State Antony Blinken and Russian Foreign Minister Sergey Lavrov are still scheduled to meet on Thursday, February 24. American officials previously said that the meeting would be canceled if Russia launched an invasion of Ukraine.