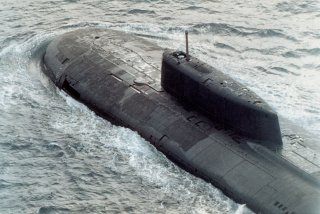 The submarine was spotted by a naval observer crossing underneath the Great Belt Bridge, a suspension bridge linking two islands in Denmark’s east. A photo of the submarine was posted to Twitter, and is thought to be the Russian Orel. The following day, the same sub was photographed by Denmark’s Ministry of Defense.

The Orel, also known as K-266, could be heading to St. Petersburg for Russia’s Navy Day parade, an annual celebration honoring the Russian Navy and Naval Infantry, analogous to the United States’ Marine Corps.

The Oscar-II class is one of Russia’s more powerful submarines. The nuclear-powered cruise missile submarines are in improvement of the original Soviet-built Oscar-class and differ somewhat in their capabilities compared to their older predecessors. The class has dual propeller shafts that are powered by two nuclear reactors and is thought to be quieter than the preceding Oscars.

Some of the Oscar-II submarine’s armament was upgraded as well. Thanks to the modernization, the class can fire the P-800 Oniks anti-ship cruise missiles, as well as Kalibur anti-ship missile which can also hit targets on land.

The naval expert H. I. Sutton speculated that the upgrade could include the hypersonic Zircon anti-ship missiles. Though the Zircon (sometimes alternatively spelled Tsirkon) is by far the fastest of the three, its range is limited, and would likely be most useful against closer-in surface targets and not as a stand-off weapon.

The Oscar-II class is perhaps most infamously known because of the Kursk submarine disaster. This Oscar-II, the K-141, sank for reasons that are still unclear about one-hundred miles from the Russian port of Murmansk. One of the leading theories posits that an internal explosion, probably in the submarine’s torpedo room, crippled the sub and killed most of the crew. In the days following the explosion, a group of submariners were still alive, though due to inclement weather and several botched rescue attempts, there were no survivors.

One of the more recent modifications to the Oscar-II class is Russia’s Belgorod submarine. This on-off, special purpose design is one-of-a-kind. It is most likely used as a spy submarine. The Belgorod is equipped to transport the Losharik, a unique submarine that can dive very deeply. The large Belgorod is also likely able to carry several—possibly up to six—of Russia’s Poseidon torpedo. The Poseidon is nuclear-armed and nuclear-propelled, and the largest torpedo ever built.

Though officially maintained by the Russian Navy, the Belgorod is thought to be crewed by members of the GUGI, or Main Directorate of Deep-Sea Research, a branch of the Russian Defense Ministry that is separate from the other branches.

The Orel is a very capable submarine and transiting through Danish waters—one of the North Atlantic Treaty Organization’s founding members—is noteworthy. Time will tell if the Orel, normally a part of Russia’s Northern Fleet, will stay in the Baltic and closer to NATO, or return to the North.