Belogorod: The Russian Submarine That Keeps the World Guessing 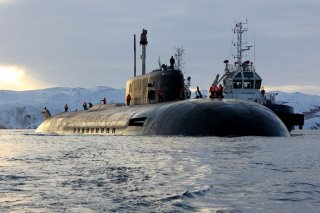 The Belogorod, as the hull is known, is rather mysterious. Work on the submarine originally began in the mid-1990s, though work was delayed several times due to financial difficulties endemic to Russia after the collapse of the Soviet Union. Despite entering service just over a year ago, not much is known about the Belogorod.

The naval expert H I Sutton explained that the sub’s christening was shrouded in secrecy — no easy task for one of the largest submarines in the world. Luckily for us, a commercial photography satellite passed over the shipyard on the day of the sub’s christening and was able to capture at least one image, offering a bit of information about the submarine. Sutton explained, “Measures were taken to control images published in the media, which only showed the rear-most section of the submarine.” The submarine’s massive backside featured a double-screw arrangement.

The Belogorod is probably a modified variant of the Oscar-II-class design, but this is where the commonality with any other submarines in the Russian navy stops. As a one-off design, the Belogorod will be a special-purpose submarine and likely used for beefing up Russian military stations or equipment under the Arctic.

To achieve these special, clandestine missions, the Belogorod will have space underneath its hull for transporting the Losharik, a midget submarine with some surprising deep-water capabilities. H I Sutton also maintains that the Belogorod will be “crewed by the Russian Navy but operated under GUGI, the secretive Main Directorate Deep Sea Research organization,” further evidence of the submarine’s special purpose.

Though the Belogorod’s existence was known, it enjoyed a moment in the limelight in 2015. During a Russian military presentation, a display board featuring the Belogorod and some of its details was supposedly “leaked” accidentally, though the unintentional nature of the leak is questionable.

Not only reserved for spy missions under the Arctic ice, but the Belogorod will apparently also carry Russia’s Poseidon nuclear torpedo. There is probably space inside the double-hulled submarine for up to six of the massive torpedoes, which are each roughly thirty times larger than conventional heavy-weight torpedoes and are the largest torpedoes ever developed.

There is also space near the topside hatch for deep-diving, unmanned remotely controlled submersibles that would likely augment the Belogorod’s clandestine mission. And this may in fact be the true intention.

One of Russia’s more ambitious Arctic projects is its so-called Harmony underwater listening system. Using a network of sensors along the seafloor, Russia plans to detect surface and underwater traffic. This array of sensors would likely detect sonar pings, changes in water pressure, and could possibly detect surface wakes or noise. Due to the complicated nature of placing such sensors deep under the Arctic ice, the Belogorod may be the ideal platform for clandestinely bugging the Arctic — enemies beware.