Russia's Hypersonic Nuke Is a Warning to America 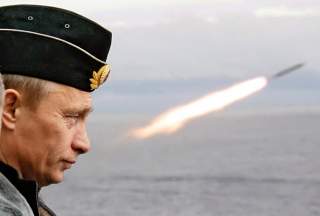 The real danger, however, is that some senior U.S. officials seem to believe American defenses such as the U.S. Navy's SM-3 and the Army's Ground-Based Midcourse Defense missile-interceptor can stop a weapon such as Avangard.

Bad advice could encourage a reckless U.S. president to pursue a risky foreign policy while wrongly taking comfort that the Pentagon's missile-defense systems protect the United States from nuclear retaliation.

That's the latest warning from Ted Postol, a scientist and nuclear-weapons expert at the Massachusetts Institute of Technology. "Statements made by Vladimir Putin clearly and unambiguously indicate that he understands that U.S. missile defenses currently have no capabilities to deal with existing Russian ballistic missiles, yet alone something like a hypersonic-like vehicle."

"What concerns Putin is that U.S. political and military leadership is so out of touch and so politicized with regard to the missile defense issue that a future president might actually think that they could get away with striking Russian nuclear forces and then using missile defenses to defend against a straggling Russian counterattack," Postol explained.

Avangard launches atop a rocket before separating and gliding toward its target at an altitude just below the upper limit of the atmosphere and a velocity 20 times the speed of sound or faster.

No existing U.S. missile defense system can target a vehicle moving that fast at such a relatively low altitude for a strategic weapon. "We don't have any defense that could deny the employment of such a weapon against us," U.S. Air Force general John Hyten, the head of U.S. Strategic Command, said in March 2018.

But not all American leaders appreciate this fact, Postol said. "For example, [retired] general James Cartwright [the vice chairman of the Joint Chiefs of Staff from 2007 to 2011] testified before the Senate Armed Services Committee that it was his judgment that the GMD system could under some circumstances have a greater than 90-percent intercept rate against a small number of ICBMs."

"When pressed by [then-]senator Birch Bayh of Indiana about the strength of his conclusion, he stated that he would advise a U.S. president to this effect in a crisis," Postol continued.

"Without going into the details at this moment, I believe his reasoning was based on a total misunderstanding of the testing statistics associated with that system. The problem is that one can imagine circumstances where somebody with Cartwright's extraordinarily limited understanding but appearance of knowledge could be seen as an expert by a president during a crisis.

"Although such a circumstance is extremely improbable, when one is talking about the potential of a large-scale nuclear exchange occurring due to such impressive levels of advisory ignorance, anyone who is worried about these problems would take Cartwright's ignorance very seriously.

"So the real problem from Putin's point of view is the potential that someone in American leadership could take an extraordinarily ill-advised decision under some kind of crisis situation to try to destroy Russian nuclear strike forces with a preemptive strike and then try to deal with the ragged retaliation using missile defenses," Postol went on.

"So it is very clear that Putin's strategy is to develop nuclear strike systems that even someone who is completely ignorant would understand cannot be addressed with missile defenses," Postol warned.

Putin's own words seem to back up Postol's assertion. "I hope our newest systems will make think those who got accustomed to militarist and aggressive rhetoric," Putin commented while announcing progress on Avangard.

"The point of the weapon is to make it clear, even to somebody who is totally ignorant, that missile defenses would have no capability to deal with the weapon," Postol said. "This is the strategy behind building and deploying ballistic missile warheads that maneuver above the atmosphere to disrupt GMD and SM-3 tracking and homing systems, and it is also the strategy behind the hypersonic ... vehicle."

"Putin understands that U.S. missile defense systems basically have little or no chance of intercepting anything," Postol concluded. "But he is not so worried about the systems as he is the numbskulls who make decisions about when and how to use the systems."