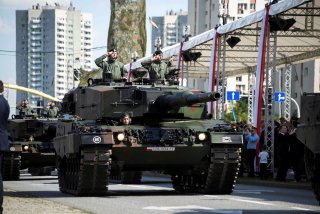 One of former President Donald Trump's complaints about the United States' NATO allies was that few actually contributed their "fair share" to the international alliance. However, that seems to be changing following Russia’s invasion of Ukraine.

Germany announced shortly after the invasion that it would ramp up defense spending in the future. Lawmakers in Warsaw announced last week that Poland would increase spending on its armed forces.

Poland's annual defense spending had been set at 2 percent of the nation's gross domestic product (GDP) in recent years, in line with its commitment to NATO.  Poland’s "Defense of the Fatherland Act" announced in October 2021, was expected to increase the budget to 2.5 percent of GDP. Now with a war literally at Poland's border, the parliament is going even further.

"There will be an amendment (to the defence plan): 3 percent of GDP on defence next year, then we will increase it," Jaroslaw Kaczynski, the leader of ruling nationalist Law and Justice party (PiS), told the lower house of parliament, Reuters reported.

Defence minister Mariusz Blaszczak also announced that the act would increase the number of soldiers in the Polish army from around 143,500 to 300,000 as part of a five-year plan.

"There will be a framework for having one of the strongest armies in NATO," Blaszczak said. "Our Fatherland needs such a Polish Army, especially now, when the evil empire is trying to be reborn across our eastern border."

The additional boost since October can be attributed to Russia’s invasion of Ukraine, which shares a border of more than three hundred miles with Poland.

"The change to the 'Defense of the Fatherland Act' is a direct response to the invasion of Ukraine," said Madeline Wild, associate defense analyst at international data analytics company GlobalData. "It is one of a growing number of examples of European states adjusting their budgets in the face of the Russian threat.”

Poland, much like Ukraine, has struggled to maintain its independence over the past centuries. It had been essentially wiped off the map in 1772 when the country was partitioned between the great powers of Austria, Prussia, and Russia.

While Poland achieved independence again after the First World War, it was forced to fend off a brutal Bolshevik invasion from Russia in 1920, and was again partitioned between Nazi Germany and the Soviet Union at the start of World War II. Following the defeat of the Nazis, Poland endured nearly five decades of Soviet domination during the Cold War.

Given those facts, it isn't surprising that Poland has opted to revise its defense spending plan for 2023 onwards to 3 percent of its GDP.

The move by Warsaw echoes both the growth in Denmark's defense budget and Germany's unprecedented defense spending increase.

"Unlike its neighbors, and relative to national wealth, Poland's revision will make the country one of the largest funders of defense within NATO (in terms of percentage of GDP spent on defense)­far surpassing the two percent target set by the organization," Wild said. "However, the increase in spending risks being limited by EU caps on budget deficits. Nine EU states have asked for a waiver on this rule and are currently awaiting a response. The mere number requesting the waiver suggests further dramatic defense budget increases are being planned across Europe."

Warsaw has announced that it will lessen the impact on the budget by funding the expansion partly through government-secured bonds issued by state development bank BGK, in addition to treasury bonds, the state budget, and profits from the central bank. It will use its pandemic spending as a guide.

"During the COVID-19 pandemic, the Polish government financed its response through bonds issued by the national development bank (BGK) and the state fund PFR, which are not included in the budget,” Wild said. “The Polish Ministry of National Defence (MoD) has suggested that these channels could be used again, but now to fund a response to a different crisis.”

Out With the Old?

Poland could also benefit from a deal with the United States that would see the potential transfer of Polish aircraft to Ukraine.

"There have been ongoing discussions surrounding the potential transfer of Polish MiG-29 aircraft to Ukraine," Wild said. "This currently seems unlikely unless the U.S. triangulates the deal by transferring F-16s to Poland as replacements for the MiG-29s.

"For Poland, this would protect the air force from any vulnerabilities resulting from a decreased fleet size but would increase anxieties around becoming the next focus for Russian aggression. The transfer is complicated; it would cause big delays to the delivery of jets to Taiwan, the original intended recipient. The sale of the aircraft to Taiwan is part of a strategic relationship being formed against Chinese posturing in the region, thus the US still perceives their timely delivery to be of high importance."