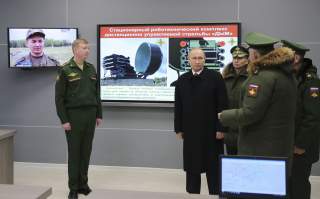 In August 2018, U.S. official Yleem Poblete  accused Russia at the Geneva Conference of Disarmament of deploying satellites into space designed to kill other satellites. Moscow, however, insists that these are simply inspector satellites designed to glide within close range of other satellites, diagnose problems with them and potentially even fix them.

The thing is, both can easily be true at the same time. Quite simply, a satellite with the fine maneuvering capacity to approach that close to another satellite and manipulative instruments to potentially repair it is also capable of disabling one. Given that explicit orbital weapons platforms have yet to be deployed to space, aggressive ‘inspection’ satellites could take on militarized roles quite easily.

Since 2013, Russia appears to have deployed four such inspector satellites named Kosmos 2491, 2499, 2504 and 2519—the peculiar activities and undeclared nature of which incited Yleem's ire. These have been observed performing close passes of other space objects, demonstrating their precision-maneuvering capabilities.

For example, Kosmos 2499 was launched undeclared by Russia in 2014, giving rise to speculation that it was intended as a satellite killer. Russian sources maintain it is a testbed for a new plasma-propulsion/ion thruster system (it looks as awesome as it sounds), which doesn’t exactly contradict the speculation. Kosmos 2491, launched in 2013, was also undeclared, bundled at launch with three openly declared satellites. Then in 2017, Kosmos 2504 soared to within one kilometer of the remains of a satellite destroyed by a Chinese anti-satellite missile. The Kosmos satellites are often moved sporadically after long periods of inactivity, causing speculation that they are up to something unusual.

Finally, Kosmos 2519 ‘Sputnik Inspektor’ was launched in June 2017 and spawned a subsatellite numbered 2521, which in turn spawned another called 2523. These performed a series of peculiar and unexplained maneuvers this summer, leading to Poblete’s comments in Geneva.

What would be the satellite-killing mechanism? Manipulator arms or even ramming would be the simplest way of disabling another satellite. However, many other convenient weapons suggest themselves such as lasers, kinetic pellets, or ‘soft’ systems such as jammers.

China too is likely investigating how to weaponize satellites. Its Shijian 15 satellite, deployed in 2013, is equipped with precise-maneuvering jets and manipulator arms. The orbital vehicle reportedly is designed to collect space debris and test orbital refueling and repair of other satellites. Shijian-15 has been observed making closes passes the Shijian 7 satellite—and some believe this ability indicate Shijian-15 could also be used for hijacking.

China and America also have tested missiles which could destroy orbiting objects from the ground, and Russia is refining such capability as well. In fact, using killer satellites may be more complicated than simply deploying ground-based missiles or jamming. However, it could have the benefit of being more ‘surgical’ than a ground-launched interceptor, creating less debris which could have unforeseen consequences. Consider that the terrifying chain-reaction of exploding satellites caused by an anti-satellite weapon depicted in the film Gravity is a thing scientists fear could happen.

Granted that ‘dual-use’ satellites with both civilian and military applications may be difficult to regulate, but are outright missiles, lasers and cannons banned on spacecraft? Not really—only weapons of mass destruction are legally banned according to the Outer Space Treaty of 1967.

So far, however, there has been an unofficial international norm against the overt deployment of orbital weapon systems—one that is generally observed but has been occasionally violated. The United States spent the 1980s (and billions of dollars) talking up plans for a ‘Star Wars' orbital anti-ballistic missile laser satellite system which was never very realistic.

The Soviet Union bought the hype, though, and responded by actually launching a 1-megawatt anti-satellite laser on the Polyus orbital weapons platform in 1987 to burn out the American Star Wars laser-satellites (yes, the ones that were never actually built). However, a glitch in the inertial navigation system caused Polyus to plummet into the Pacific Ocean after separating from its booster. During the 1970s, the Soviet Almaz series of secret orbital spy- stations were deployed with 23-millimeter revolver cannons for self-defense which were even test fired on a satellite.

Ironically under the circumstances, Russia has been pushing for stricter international rules against the militarization of space at the U.N.-associated Council for Disarmament. That Council has previously generated major treaties on nuclear non-proliferation and the banning of chemical and biological weapons. This agenda item is called Prevention of an Arms Race in Outer Space (PAROS), and Russia has forwarded a specific proposal called the PWTT which has Chinese backing.

However, America has not been keen to support the PWTT, as U.S. space warfare capabilities are believed to be stronger than those of China and Russia, whereas these countries are confident that they can blow satellites up with ground-based weapons that would specifically not be banned.

Washington maintains that a ground-based anti-satellite ban would need to be incorporated to gain its adherence to PAROS. However, the Council has been ineffectual for two decades—recently, for example, it came to be chaired by chemical-weapon-using Syria due to a coincidence of its alphabetic rotation system.

Though twenty-first-century space warfare is unlikely to entail loss of lives in space anytime soon, its effect would likely be quickly felt by civilians on Earth as they lose access to satellite networks they take for granted in their daily lives such as GPS navigation, wireless long distance communications and so forth.

Generally, the Pentagon and its Chinese and Russian counterparts assume that in a high-intensity conflict, military forces would likely lose access to communication and navigation satellites they usually rely upon. For example, GPS offers an affordable guidance system for many kinds of bombs and missiles, but new munitions are being designed with backup navigation systems should GPS satellites be destroyed or disabled.

Regardless, the recent spat in Geneva highlights the quiet arms race building up in space, though one that so far relies upon the use of discrete or dual-use systems. Indeed, many anti-satellite measures may not involve kinetic effects at all. Though a robust anti-space militarization agreement might save Russia, China and the United States billions of dollars, for now all three countries seem committed to expanding their space and anti-space capabilities, hoping to seize an asymmetric edge over their potential adversaries.