Russia's Largest Naval Fleet is Holding Drills in the Atlantic 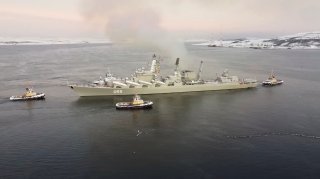 "As part of the drills with the Arctic expeditionary task force, a group of the Northern Fleet’s combat ships and support vessels practiced anti-submarine assignments in the Norwegian Sea,” the Russian naval press office said, according to Russian state-backed news outlet TASS. “The crews of the missile cruiser Marshal Ustinov and the frigate Fleet Admiral Kasatonov hunted down the notional enemy’s submarines with the help of an anti-submarine warfare helicopter.”

Ka-27M helicopter crews took off from the frigate Admiral Kasatonov, practicing surveillance missions “using radio-technical equipment and an onboard sonar.” These drills followed closely on the heels of rapid deployment and live-fire exercises reportedly conducted last week at a training ground in northwestern Russia.

Admiral Flota Kasatonov, commissioned in 2020, is the second of the more modern Admiral Gorshkov-class frigates. Kasatonov is armed with a complement of Kalibr and Oniks anti-ship cruise missiles; the frigate will also support Russia’s upcoming 3M22 Tsirkon winged, anti-ship hypersonic cruise missile. The Tsirkon is capable of maneuvering mid-flight and reaching speeds of up to Mach 9 (around 6900 miles per hour) with a reported operational range of up to 1,000 km. It can potentially pose a credible threat against U.S. and NATO carrier strike groups (CSGs) and impede carrier air wings from operating effectively.

TASS reports that the Northern Fleet’s Norwegian Sea drills are part of a broader set of Russian naval exercises slated for the January-February period. These drills will cover vast swaths of Russian maritime territory and will include the Mediterranean, the Northeastern Atlantic, and the Pacific Ocean. The exercises will reportedly draw sixty aircraft, one thousand pieces of military hardware, and about ten thousand troops in total.