Russia's Mach 3 MiG-41: Everything We Know 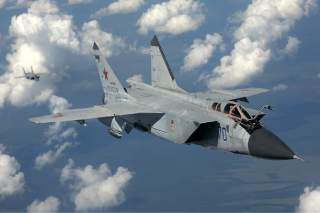 Russian airframer RSK-MiG is insisting that the company is developing a fifth-generation replacement for the Soviet-era Mach 2.83-capable Mikoyan MiG-31 Foxhound interceptor. However, the new PAK-DP interceptor—which MiG calls the MiG-41—might not necessarily fit the Western vision of a fifth-generation fighter. Indeed, the new jet might be more akin to an evolutionary development from the Foxhound.

“This is not a mythical project, this is a long-standing project for the MiG and now we are carrying out intensive work under the aegis of the UAC [United Aircraft Corporation] and will present it to the public soon," MiG Aircraft Corporation CEO Ilya Tarasenko told the Russian state-owned TASS news agency.

Tarasenko told TASS that research and development as well as experimental design work on the MiG-41 will start "in the immediate future." Deliveries to the Russian Armed Forces are expected to start in the mid-2020s, according to TASS. However, that date is almost certain to shift to the right.

Michael Kofman, a senior research scientist at the Center for Naval Analyses specializing in Russian military affairs, does not believe that a MiG-41 PAK-DP is a particularly far-fetched development. Russia does have a genuine requirement to replace the aging MiG-31 design. “The MiG-31 is an effective but aging platform, and there’s only so much you’re going to get out of that airframe,” Kofman said.

However, a Russian next-generation long-range interceptor will not likely conform to Western notions of a fifth-generation fighter. Because the MiG-41 will primarily be an interceptor flying over domestic territory, it will not likely be stealthy. However, it will likely be extremely fast—in the realm of Mach 3.0—and fly at high altitudes to cover the most amount of territory in the shortest period of time. Indeed, in many ways, the MiG-41 might look like an incremental evolution of the Foxhound with advanced sensors than what many might imagine to be a fifth-generation fighter.

The reason the Russians are developing a new airframe is because it is more efficient for Moscow to build a new jet that incorporates advances in manufacturing technology, materials and airframe design from the outset than it would be to restart production of a modernized MiG-31 variant. “In many ways it’s more expensive to build an older platform,” Kofman said. “The numerous processes involved are now antiquated and more costly. Better to work with new materials, airframe design, electronics etc.”

The new PAK-DP could incorporate newer and more efficient engines developed from the izdeliye 30 powerplant that Saturn is currently developing for the second stage Sukhoi Su-57 PAK-FA air superiority fighter. The Russians might also leverage many of the new sensors developed for the Su-57 for the MiG-41 design. Nonetheless, given that the MiG-41 is likely to be a Mach 3.0 capable design that routinely operates at the extremes of speed and altitude, it will be technically challenging to adapt those systems for the new aircraft. But while the MiG-41 will likely take advantage of the nearly four decades of the technical advancements since the Foxhound became operational, it will be similar in many respects to its predecessor.