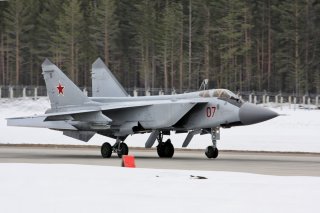 Here's What You Need To Remember: Using multiple warheads for missile defense is particularly interesting. Russia appears to be envisioning a single missile that will dispense several sub-missiles that will intercept hypersonic weapons, which travel faster than Mach 5.

But how feasible is the concept remains to be seen.

“The Ministry of Defense made a fundamental decision to develop for the MiG-31 fighter and the promising MiG-41 a multifunctional long-range interceptor missile system (MPKR DP) capable of hitting hypersonic munitions,” according to state-owned Russian newspaper Izvestia. “Theoretical studies have already been carried out on an ultra-long-range air-to-air missile with a multiple warhead.”

The MiG-31 (NATO code name: Foxhound) is an air defense interceptor descended from the Cold War MiG-25 Foxbat. The MiG-41 is reportedly a developmental project to develop a MiG-31 replacement.

Using multiple warheads for missile defense is particularly interesting. Russia appears to be envisioning a single missile that will dispense several sub-missiles that will intercept hypersonic weapons, which travel faster than Mach 5. “Airborne heavy ammunition will deliver a warhead with several modern air-to-air missiles over a distance of several hundred kilometers,” explained Izvestia. “Then they will separate from the carrier and begin to search and attack targets on their own. An active homing head with its own radar will help them in this.”

“All warheads will be displayed at a pre-calculated point on the trajectory of a flying munition and attack it in the nose. The use of ultra-long-range missiles will expand the area of ​​destruction of the interceptor.”

The theory seems simple enough: launch enough radar-guided warheads at a hypersonic target, and you’re bound to hit something. “An ordinary anti-aircraft missile has one warhead,” Russian defense expert Dmitri Kornev told Izvestia. “The probability of a miss on a hypersonic maneuvering target is very high. But if one ammunition carries several homing shells, then the chances of hitting a high-speed object increase significantly.”

The U.S. uses a similar approach for ballistic missile defense against ICBMs. Interceptor rockets will launch “kill vehicles” with multiple warheads, each equipped with sensors as well as thrusters for rapid maneuvering.

Which raises a question: if many critics doubt that ballistic missile defense is even feasible -- “like hitting a bullet with another bullet,” as the saying goes -- then what about hypersonic missiles?

Izvestia paints a scenario where the process works smoothly. “Especially effective is the use of the system during aircraft operations as part of a single information space. Aerial targets, cruise or hypersonic missiles can be detected by ground-based radars, early warning radars, or an attack warning system. The fighter will only need to launch an ultra-long-range missile in the desired area. At the same time, the interceptor will not have to risk itself entering into an air battle.”

Yet U.S. ballistic missile tests have experienced numerous failures: President Ronald Reagan’s grandiose vision of a “Star Wars” total missile shield has shrunk to a minimalist defense against a few North Korean ICBMs. Hitting Mach 20 with a warhead is no easy feat, especially when the warheads are accompanied by decoys to confuse anti-missile defenses.

All of which means that merely firing a salvo of air-to-air homing missiles, and hoping that one will hit the target, may be a bit of wishful thinking.