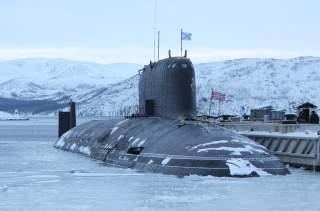 Russia’s second Severodvinsk-class submarine K-561 Kazan, which is a modified Project 08851 Yasen-M design, went to sea for the first time for builder’s trials on September 24.

The massive nuclear-powered guided missile submarine (SSGN) was designed by the Malachite design bureau in St. Petersburg and was built in the northern Russian city of Severodvinsk. Kazan was launched on April 8, 2027, and was originally expected to be delivered to the Russian Navy this December, but construction work on the vessel was delayed. At present, Kazan is not expected to be delivered to the Russian Northern Fleet until at least 2019. Nonetheless, the Russian vessel is expected to be the most formidable enemy submarine the United States Navy has ever faced.

The United States Navy was already impressed with the original Severodvinsk, which is an older design that had been under construction since 1993 before eventually being commissioned into service in December 2013. Shortly thereafter in 2014, Rear Adm. Dave Johnson, who was then Naval Sea Systems Command’s (NAVSEA) program executive officer (PEO), told me he was so impressed with the Russian submarine that he had a model of Severodvinsk built for display outside of his office.

“We’ll be facing tough potential opponents. One only has to look at the Severodvinsk, Russia’s version of a [nuclear guided missile submarine] (SSGN). I am so impressed with this ship that I had Carderock build a model from unclassified data.” Johnson said during the Naval Submarine League’s 2014 symposium in Falls Church, Va. “The rest of the world’s undersea capability never stands still.”

Later in 2016, Rear Adm. Michael Jabaley, who was then the Navy’s program executive officer for submarines—speaking at the Center for Strategic and International Studies—said on July 8, 2016,  that the Navy launched its Acoustic Superiority Program to improve the performance of Virginia-class attack submarine as a response to the advent of the Severodvinsk-class.

“This is our response to the continued improvement in our peer competitors’ submarine quality,” Jabaley said. “The Russians with the production of the Severodvinsk SSGN took a significant step forward in their acoustic ability. We want to maintain pace ahead of that. We never want to reach acoustic parity, we always want to be better than anything any other country is putting out there in the submarine domain.”

Adm. James Foggo—now the commander of U.S. Naval Forces Europe—had also expressed how impressed he was with the Severodvinsk design. “It’s a very impressive submarine,” Foggo had told The National Interest in 2016. “If you look across the design of the Russian Federation Navy, where they have put their resources and their research and development efforts has primarily been in the undersea domain and in the submarine force.”

Though Severodvinsk—and her more modern sister ships like Kazan—are very capable submarines, Foggo had said, the U.S. Navy still retains an edge. But Russia will continue to invest in submarine research and development and it will continue to build an evermore-capable undersea fleet. “I believe that we—the West—still have an asymmetric advantage,” Foggo said. “I believe they will continue to refine their submarine capabilities with the intent of achieving parity with the West—ourselves included.”

Kazan is an example of Russia’s efforts to refine their submarine technology. Kazan is believed to be roughly 10 meters shorter than her predecessor, but appears to pack a larger punch. According to some reports, the refined Yasen-M design is thought to have eight torpedo tubes, which is two less than the original Severodvinsk. However, the new vessel is thought to incorporate two additional missile tubes for a total of ten silos. Each of those silos is thought to be able to carry four missiles—thus Kazan and the subsequent Yasen-Ms will pack an enormous offensive punch.