Stealth and Armed to the Teeth: US Navy's Big Plan for Submarine Dominance 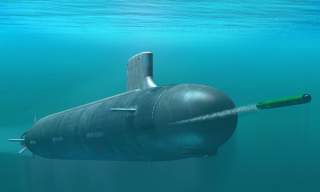 The United States Navy is moving swiftly to make sure that its submarines are not eclipsed by new threats such as Russia’s new Project 885 Yasen-class attack boats. While the U.S. Navy has talked about its efforts to maintain its technological superiority over potential foes, the service’s two top undersea warfare officers detailed their Acoustic Superiority Program at an event hosted by the Center for Strategic and International Studies on July 8.

“This is our response to the continued improvement in our peer competitors’ submarine quality,” Rear Adm. Michael Jabaley, the Navy’s program executive officer for submarines, said. “The Russians with the production of the Severodvinsk SSGN took a significant step forward in their acoustic ability. We want to maintain pace ahead of that. We never want to reach acoustic parity, we always want to be better than anything any other country is putting out there in the submarine domain.”

The future USS South Dakota (SSN-790) will be the first acoustic superiority test submarine when she is delivered in late 2017. During her one-year post-shakedown availability (PSA) in 2018, South Dakota will receive some fairly significant modifications from the baseline Virginia-class submarine that are expected to be tested at sea starting in 2019 and running through 2020.

The modifications include new acoustical hull coatings, a series of machinery improvements inside the hull and the addition of two new large vertical sonar arrays—one on each side. The new sonar arrays “provide a significant advantage in the ability to detect other submarines before you yourself are in a position to be detected,” Jabaley said. Meanwhile, the machinery improvements also promise some “significant return on investment.”

Additionally, South Dakota will receive a new enhanced propulsor design, which is being added during construction. However, if the new propulsor design proves to be less than successful, the Navy plans to replace it during the boat’s post-shakedown availability. “South Dakota will have an improved enhanced hybrid propulsor that we have developed with DARPA,” Jabaley said. “It promises to present a significant acoustic advantage.”

If the modifications trialed on South Dakota prove to be successful, then the technologies will be adopted for use on future Virginia-class boats as well as the future Ohio Replacement Program (ORP) ballistic missile submarines. “The lessons we learn, we will learn from her [South Dakota], will then drive what we install on future ships including Ohio Replacement and what we back-fit on existing Virginias,” Jabaley said.

The new quieting technology should more than mitigate any signature increase on the planned Block V Virginia-class submarines that will include the new Virginia Payload Module (VPM). The last 19 Virginia-class boats are all expected to carry the VPM missile tubes. After the last Virginia is built, the Navy expects to move onto a new attack submarine design.

But the U.S. Navy hasn’t forgotten about emerging threats that some have argued could render submarines obsolete—but the service is not impressed by what it sees as overhyped fears. “We’re not there yet, we’re not really close—we’re working on that just as hard as or harder than anyone else,” Jabaley said. Nonetheless, the Navy has taken—and has always taken—a proactive view toward potential new threats.

Rear Adm. Charles Richard, the Navy’s director of undersea warfare, said that the service has run a Submarine Security Technology Program (SSPT) for both its ballistic missile and attack submarines for decades. The idea behind the effort is to anticipate potential future threats in advance and counter them. “SSTP has been around for a long time,” said Richard—who worked in that office 30 years ago. “It looks out into the future—as far as 25 or 30 years—based on the physics—so it’s physics based, intel informed—how could someone potentially attempt to detect a submarine and if we see something feasible, we start working on what we’re going to do to counter that.”

Richard added that the idea that submarines are going to be rendered obsolete reemerges every five to ten years as some new technology emerges. However, given the “brutal” physics of the undersea domain, most of those new technologies never quite live up to the hype. Thus, whether it was satellites in the 1980s or the current threat of big data and unmanned underwater vehicles, emerging new technologies will have to confront the harsh realities of the ocean environment. “Those challenges still remain,” Richard said—adding that the undersea Navy is quite confident in its ability to both exploit new technologies for anti-submarine warfare and also to hide its submarines at sea.

While the Navy has suggested previously that the SSN(X) will use technologies from late model Virginia-class submarines and the ORP—such as a permanent magnet motor, Richard—when asked if the future boat might use a titanium hull—didn’t rule it out. “The short answer to your question is yes, we are looking hard at in terms of concepts for the next attack submarine and so between operational concepts and technologies, we’re trying very hard to have nearly limitless thinking in terms of what is possible undersea while at the same time make sure we apply the rigor...to come to an analytically solid conclusion.”

Meanwhile, Jabaley said that there is nothing to be done about the Navy’s current attack submarine shortfall. The fleet currently stands at about 53, but it will drop below the 48-boat requirement—which the Navy admits is set too low—down to only 41 by 2029. The submarine shortfall can be mitigated somewhat by continuing to build two attack boats for the indefinite future. But with the current budgetary environment, the Navy is not likely to ever get the number of submarines it needs.

The Navy will need to increase submarine production if it wants to make up for the submarine deficit, but that will mean that Congress will have to increase the service’s shipbuilding budget. “We reach a minimum of about 40 to 41 in the late ‘20s, early ‘30s before we start climbing back up out of that,” Jabaley said. “This is not something we can we fix at this point—it’s the result of decisions made long ago.”