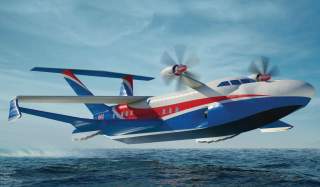 It’s a new weapon for the Russian Navy.

The Orlan is a ground effect vehicle, or GEV (also known as a wing-in-ground-effect craft), which has characteristics of both a ship and aircraft. Russia will be developing the missile-equipped craft by 2027, under the latest ten-year defense plan, according to Deputy Prime Minister Yuri Borisov.

The Orlan will patrol Russia's northern sea routes such as the Barents. "It can hover and monitor these areas, as well as the internal seas: the Caspian and the Black Seas," Borisov said. The vehicle can also be used as a rescue vessel to retrieve ship crews during disasters. Borisov said the Orlan would be armed with missiles, though he offered no specifics.

The Orlan’s birth will be late. In 2015, Igor Kozhin, chief of Russian naval aviation, announced that the navy would receive a ground effect vehicle with a lift capacity of 300 tons by 2020, according to TASS. Later, the chairman of the Alekseyev Central Hydrofoil Design Bureau said the craft was still in the conceptual design phase.

As TASS describes it, “a wing-in-ground-effect craft is a multimode vessel, which in its basic regime performs a flight using the ground effect over the water or other surface without constant contact with it. The craft is kept in the air by the aerodynamic lifting force generated on the air wing, the body or their parts designed for the use of the ground effect. The wing-in-ground-effect craft normally performs flights at a lesser altitude than ordinary aircraft but moves at a higher speed than a ship.”

This isn’t Russia’s first foray in GEVs. In the 1980s and 1990s, Russia sailed—or flew, depending on your viewpoint—the singular MD-160 “ekranoplan,” dubbed the “Caspian Sea Monster.” A 550-ton, 244-foot-long behemoth that flew sixteen feet off the ground at a top speed of 340 miles per hour (see the video here), the MD-160 could be armed with Moskit anti-ship missiles or ferry 137 tons of troops and equipment.

Though faster than a ship and able to safely fly lower than an aircraft, it was slower than an airplane and not very maneuverable. Russia retired the Monster in the 1990s.

Which brings up the question of how useful the new GEV will. An airplane-like boat (or boat-like airplane) is attractive in its versatility. But the technology has its drawbacks. As with a regular aircraft, flying at low altitude uses more fuel. Flying so low to the water also limits such craft to calm seas, which suggests that it will be used in confined waters rather than the open ocean.