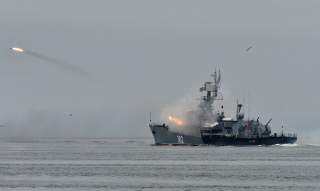 Russia’s navy is developing a new version of the sea-launched Kalibr cruise missile with double the range.

Current versions of the Kalibr have ranges up to about 1,200 miles, depending on the variant. “The newest high-precision ship-based Kalibr-M cruise missile with a maximum firing range of more than 4,500 kilometers [2,800 miles] is being developed for the Russian Navy,” an unnamed Russian defense industry source told Russian news agency TASS. “The creation of the rocket is at the stage of scientific research and financed by the Ministry of Defense.”

“The source added that the new missile will differ from the existing Kalibr missiles in service both in terms of its longer range and dimensions,” according to TASS. “‘It will be much larger, the weight of its warhead will approach 1 ton,’ he said.” The missiles will first be assigned to frigates, then other large surface vessels and submarines. “Kalibr-M is designed to destroy land facilities and will be able to carry both conventional and nuclear warhead,” the source said.

The source added that the project is part of GPV 2027, Russia’s ten-year weapons procurement program, and that “the rocket must be transferred to the fleet before the end of the program.” Presumably, this means that the upgraded Kalibr will be fielded before 2027.

Kalibr is Russia’s multipurpose naval cruise missile, or rather a family of missiles, including anti-ship variants and anti-submarine rocket-torpedoes (to add to the confusion, export models of Kalibr are known as “Klub”). But most prominent is the 3M-14 series (also known as the SS-N-30), subsonic ship- and submarine-launched land attack cruise missiles similar to the U.S. Tomahawk.

The ONI report included a map showing areas of Eurasia that could be reached with existing versions of Kalibr from Russian warships stationed in the Norwegian, Black, Caspian and Barents Seas, which are relatively safe waters where such vessels could operate near Russian territory: the various range circles covered an area stretching from France to Iran to Kazakhstan.

Kalibr made its combat debut in Syria in 2015, when Russian ships fired a salvo of 3M-14 missiles at Syrian rebels. Russia claims it has fired more than 100 Kalibrs at Syrian targets.

News of the long-range Kalibr comes amid reports that Russia is deploying existing Kalibr missiles in the Atlantic, which the Pentagon believes could put them within range of East Coast cities. “Moscow is adding Kalibr land attack cruise missiles to both warships and missile submarines that Moscow plans to use in Atlantic patrols near the United States, sorties that were once routine during the Cold War,” according to the Washington Free Beacon.

Kalibr has two qualities that worry Western navies. First, they are sea-skimming sea missiles, flying over the water to avoid radar detection and thus giving their targets less time to shoot them down or jam down.

But the bigger problem is the sheer proliferation of Kalibrs, which can be fitted to even small Russian warships through standardized vertical launch tubes. “Kalibr provides even modest platforms, such as corvettes, with significant offensive capability and, with the use of the land attack missile, all platforms have a significant ability to hold distant fixed ground targets at risk using conventional warheads,” said a Russian defense official in 2011. “The proliferation of this capability within the new Russian Navy is profoundly changing its ability to deter, threaten or destroy adversary targets. It can be logically assumed that Kalibr capability will be retrofitted on those larger Soviet legacy ships and submarines that undergo major overhauls and/or modernization.”

There is more to an effective warship than sticking missiles on it. Effectiveness requires capabilities such as sensors and command and control networks. Still, if Kalibr can turn even a small Russian warship into a ship-killer or land attack platform, that’s a powerful capability.