Russia's New Stealth Fighter Could Be an F-35 Rip Off 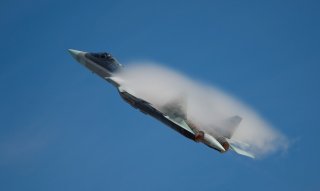 Russia has unveiled a new single-engine stealth fighter which, upon first glance, looks surprisingly similar to the U.S. F-35.  Much has been discussed about Chinese efforts to rip-off or copy U.S. specs and F-35 designs, as evidenced by the J-20 and J-31. Is Russia now doing the same thing?

Reportedly built by Sukhoi, the new jet recently made a public appearance, initially covered beneath some kind of black tarp. Many of the most critical elements of the new fighter are unknown. But upon first examination, the plane looks like an F-35 rip-off.

Of equal importance are questions about its thermal signature. The back end has been tough to see with available photos, although the aircraft does appear to have an internally buried engine. It also looks like it has an internal weapons bay. However, how is the exhaust or heat emission handled?  Does it use some kind of Infrared Signature (IR) suppressor or heat-management technology? That would also be of great significance regarding the relative effectiveness of its stealth characteristics.

Also, apart from its stealth properties, many of the unknown attributes of the jet are likely to determine its level of performance and at some point shed light on the question of whether it can truly compete with the F-35. For example, what kind of computing does it have? Are its sensors high-fidelity and long-range in any way comparable to an F-35? Its maneuverability is also not likely to be seen until it performs in an airshow or is observed more broadly.

It does have a different configuration than Russia’s existing Su-57, a stealthy aircraft purported by Russian developers to be a 5th-generation platform.  All this being considered, the real question of superiority may come down to a numbers question, meaning how many of them might Russia build and on what kind of timeframe.  Should the F-35, Su-57 or new Russian fighter be similar in performance ability to any degree, the superior force may simply be which country has more high-end, 5th-generation aircraft. In this respect, the United States seems to have a clear advantage. Globalfirepower.com says the United States operates 1,956 fighters/interceptors and is of course known to be moving quickly to add large numbers of F-35s. By contrast, the same assessment reports in its 2021 rankings that Russia only 789 fighters/interceptors, just more than one-third of the U.S. number.

If one of the aircraft were far superior to the others in terms of targeting range, weapons reach and guidance or computing and electronic warfare, numbers might not be as crucial. However, should they be in any way comparable, the force with larger numbers will be more likely to win a war of attrition, outlast the other and cover wide areas of combat space an opponent could not defend.