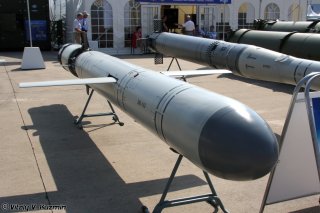 Russia’s plan to develop a long-range version of the Kalibr naval cruise missile is a mistake, warn critics. The missile is too big to fit on many Russian warships.

But what’s surprising is that this criticism isn’t coming from the Pentagon or CIA. It’s coming from Russia’s own defense experts, who say the new missile is more Soviet-era megalomania than clever engineering.

Russia created a stir earlier this year when it announced that it would develop a long-range version of Kalibr, which is actually a family of missiles, including sea-skimming anti-ship missiles and anti-submarine rockets. The most prominent member of that family is the 3M-14, a nuclear-capable subsonic cruise missile similar to the U.S. Navy’s Tomahawk. The 3M-14 (also known as the SS-N-30) has a thousand-pound warhead and is estimated to have a range of 1,000 to 1,500 miles, compared to 900 miles for the new Tomahawk Block IV.

The 3M-14 isn’t just dangerous because of what it can do, but also because of who can launch it. The missile can be fired from vertical launch tubes that can be installed not just on cruisers, destroyers and submarines, but also on smaller warships such as corvettes and frigates. The U.S. Navy’s Office of Naval Intelligence warned that “Russia plans to deploy Kalibr capability on all new design construction of nuclear and non-nuclear submarines, corvettes, frigates, and larger surface ships.”

As if the prospect of cruise missiles arming most every Russian warship wasn’t bad enough, there came the news of the long-range Kalibr. The new missile will be larger, have a range of 4,500 kilometers (2,800 miles)—double or triple the range of the older model—and its conventional warhead has been doubled to one ton, according to Russian news agency TASS. This raised the specter in the American press of little Russian ships hitting American targets from thousands of miles away.

But wait a minute, say Russian defense commentators Nikolai Novichkov and Vasily Kostin. Increasing the range of the Kalibr will make the missile too big to fit the launch tubes of many Russian vessels, they write in an article for Russian defense magazine Military-Industrial Courier (Google English translation here).

“The creation of the Kalibr-M rocket will cancel all efforts to improve the strike potential of the Russian Navy, since none of the above types of ships, let alone submarines, will be able to use SLCMs [sea-launched cruise missiles] of such dimensions,” Novichkov and Kostin write.

While acknowledging that they are basing their calculations on open sources such as TASS, Novichkov and Kostin also use some persuasive math to demonstrate that for Kalibr-M to have longer range and a bigger warhead, the physical dimensions of the missile will make it too large to fit into for current launch tubes. They estimate that the Russian Navy can currently fire about 190 older Kalibr missiles from various frigates, corvettes, and nuclear- and diesel-powered submarines. The launch tubes needed for the larger Kalibr may be too big for the smaller ships.

The two Russian experts argue that Kalibr-M is a reversion to the old Soviet habit of “giant-mania,” or building larger weapons simply because they are larger. They believe that the smaller warheads on the Tomahawk and older Kalibrs are sufficient, and that Russia would do better to cancel Kalibr-M and instead build the hypersonic 3M22 Zircon, a Mach 5-plus anti-ship missile that may be too fast for Western anti-missile defenses to shoot down.

“Creating a SLCM with a range of more than 4,500 kilometers and a warhead of about a ton will lead to the emergence of the next super-expensive ‘monster-weapon,’” Novichkov and Kostin warn. “Such megalomania was a characteristic feature of the Soviet military-industrial complex.”

Michael Petersen, director of the Russia Maritime Studies Institute at the U.S. Naval War College, believes that Novichkov and Kostin make a sound argument. “Missile range is generally a function of the volume of fuel, weight of the warhead, and, to a lesser extent, fuel efficiency,” he told the National Interest. “The authors argue that in order to achieve this range with this size warhead, the missile would need to be much larger, and the existing VLS [vertical launch system] tubes on modern Russian warships are too small. A huge R&D and production effort would be necessary to produce new VLS tubes.”

However, Petersen says he is “skeptical” that the Kalibr-M will actually be fielded. “A newer, larger Kalibr-M would drive Russian navy ship designers back to the drawing board,” he says. “Overall, Russian naval modernization has been impressive, but it has underperformed against the expectations of its last two state armaments programs, and other services are seeing a larger share of the funds available for modernization. Russian shipbuilders are already struggling to produce new and modernized ships and submarines on time. They are not about to delay long-term production plans for this missile.”