Russia's New Yasen-Class Submarine Is Here and It Looks Fierce 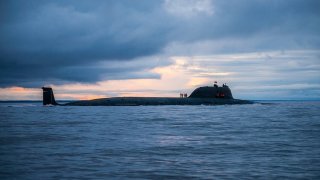 Russia’s defense industry will float out the third Yasen-M submarine on Friday, according to top government officials.

"The nuclear-powered missile-carrying underwater cruiser Krasnoyarsk will be floated out in a special ceremony at the Sevmash Shipyard in Severodvinsk on July 30. The launch ceremony will be held under the direction of Russian Navy Commander-in-Chief Admiral Nikolai Yevmenov,” read a statement issued by Russia’s Defense Ministry. The TASS report containing the statement clarified that the Sevmash Shipyard is currently in the midst of final preparations to launch the submarine, adding that the Krasnoyarsk’s readiness will be formally announced to the leadership of the Russian Navy “soon.”

TASS frequently deals in leaks by anonymous industry insider sources, but the news of Krasnoyarsk’s launch reportedly comes directly from the Defense Ministry. Krasnoyarsk is the third model in the Yasen-M (also known as project 885M) line of nuclear-powered cruise missile submarines, preceded by Kazan and Novosibirsk.

Conceived in the late 1980s, the Yasen class was intended to replace Russia’s aging Akula-class nuclear-powered attack submarines. The first Yasen model, Severodvinsk, was laid down in 1993, but funding for the project sputtered in the decade following the Soviet collapse. By the time that a newly modernizing Russian Navy returned to finish the Severodvinsk in the late 2000s, large swathes of its avionics and other design features were outdated or verging on obsolescence. The Kremlin decided to relaunch the Yasen class under the Yasen-M designation, implementing a slew of design tweaks and performance upgrades to account for the roughly two-decade gap between Severodvinsk and the next Yasen submarine in line, Kazan.

Yasen-class submarines have a submerged displacement of 13,800 tons and can reach a maximum speed of up to thirty-five knots. The Yasen-M revision brings revamped onboard electronics, a slightly reduced overall length, and reportedly a new KTP-6 rector that is believed to reduce the submarine’s noise levels. Although the U.S. Navy will likely continue to enjoy a submarine acoustics signature advantage over Russia for the foreseeable future, the Yasen class has done more to reduce this persistent noise level gap than any other nuclear-powered attack submarine in Soviet/Russian naval history.

The submarine’s vertical launching system supports up to thirty-two Oniks P-800 Oniks anti-ship cruise missiles or forty Kalibr submarine-launched missiles. According to earlier, unconfirmed reports, these missiles can be salvo-launched. Yasen-M’s arsenal will be headlined by Russia’s new 3M22 Tsirkon winged anti-ship hypersonic cruise missile, which has a top speed of up to Mach 9 and is capable of performing mid-flight evasive maneuvers. Russian defense experts believe that Tsirkon can credibly hold U.S. carrier strike groups (CSG’s) at risk and substantially impede the effectiveness of carrier air wings. There are several different Kalibr variants to accommodate a wide range of missions and use-cases. Yasen submarines will also reportedly support the upcoming Kalibr-M, a larger Kalibr version with nearly double the operational range at 4,500km.

Krasnoyarsk is projected to enter service in Russia’s Pacific Fleet by the end of 2022. The Russian Navy plans to commission a total of eight Yasen-M submarines through 2027.