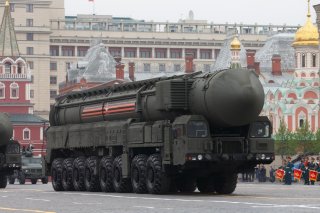 Russia’s current level of nuclear modernization is the highest in the country’s history, according to a top defense official.

"The large-scale and dedicated work […] resulted in the highest level of nuclear trifecta modernization in its entire history — 89.1%," said Defense Minister Sergey Shoigu during a Defense Ministry meeting on Tuesday.” The Strategic Rocket Forces have completed the refurbishment of the first rocket regiment of Avangard rocket systems with intercontinental ballistic missiles, armed with hypersonic gliding cruise warheads. Two more rocket regiments have been put on duty equipped with the first Yars rocket systems.”

One of six new weapons unveiled by Russian president Vladimir Putin during his 2018 state-of-the-nation address, Avangard is a hypersonic boost-glide vehicle (HGV) that first entered service in late December 2019. Sources familiar with a U.S. intelligence assessment of the Avangard program told CNBC earlier that year that Russia’s armed forces are expected to procure “no more than 60 of these hypersonic weapons” due to prohibitive production costs.

RS-24 Yars, also known as Topol-MR, is a Russian Intercontinental Ballistic Missile (ICBM) system introduced in the late 2000s. Yars is believed to be an advanced development of the older Topol-M ICBM, conceived in the 1980s and deployed in the years following the Soviet collapse. Yars is armed with up to six multiple independently targetable warheads (MIRVs), each reportedly carrying a yield of at least 300 kilotons. As with its Topol-M predecessor, Yars can be deployed in both road-mobile and silo-based formats.

Putin, who attended the same Defense Ministry meeting, echoed Shoigu’s positive assessment of Russia’s military modernization. "The outgoing year was extraordinary just like the previous 2020,” he said. “First and foremost, because of the ongoing coronavirus pandemic. It is of principal importance that the Armed forces completed all objectives accurately, without disruptions.”