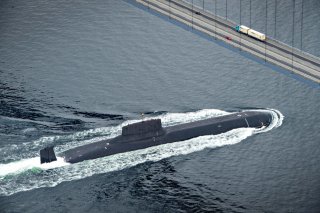 In an event hosted earlier this month by the Center for Strategic and International Studies, Admiral Robert P. Burke drew attention to the emergent threat from Russia’s modernized submarines. Burke, who is the Commander of the U.S. Naval Forces Europe, U.S. Naval Forces Africa, and Allied Joint Forces Command Naples, explained that Russian submarines operating in the Arctic can drift down to the Atlantic to potentially “hold Europe and the continental United States at risk with land-attack cruise missiles.” These submarine-launched missiles, added Burke, will soon be capable of traveling at hypersonic speeds. “That’s a real threat, and that’s something we have to be ready to address.”

Later Yasen-M models will reportedly be able to accommodate Kalibr-M, a heavy Kalibr variant with a maximum range of 4,500 kilometers as compared with the 1,500–2,500 km of standard Kalibr missiles. Burke’s brief mention of the threat from hypersonic missiles is a likely reference to the upcoming 3M22 Tsirkon (also known as Zircon) winged, anti-ship cruise missile that can reportedly travel at a speed of over Mach 8, or around 9,800 kilometers per hour. Tsirkon is expected to enter service in the early 2020s, with the Yasen line among the top submarine contenders for an early Tsirkon fitting. Aside from its modern armaments suite, the Yasen class boasts a significantly smaller acoustic signature, slightly narrowing the massive noise signature gap between U.S. and Soviet/Russian submarines that persisted throughout the Cold War and early post-Soviet years.

Nevertheless, Burke noted that NATO partners including France and the UK have the naval capabilities to mitigate the growing threat from Russia’s modern submarine force: “The surface combatants today, are, in certain acoustic environments that the Atlantic presents, in geographic parts of the Atlantic, are allowing us to do quite well against sixth-generation Russian submarines,” he said. Additionally, NATO’s P-8 Poseidon aircraft remains a potent tool of anti-submarine warfare (ASW).

But the west has a more permanent ace up its sleeve: geography. According to military experts, the GIUK gap—that is, the natural naval choke point between Greenland, Ireland, and the United Kingdom—remains the geostrategic fulcrum for effective western countermeasures against potential Russian naval encroachment into the Atlantic. Retired Navy Captain and ASW expert Jerry Hendrix told Business Insider that NATO’s best bet of detecting Russian submarines is to catch them just north of the GIUK gap, in what is a “very deep basin of cold water” that “is ideal water for sound to propagate in... so that I can hear a very quiet submarine, perhaps better than most places in the world.”