Russia's Only Aircraft Carrier Is in Serious Trouble 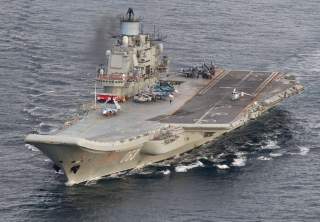 From crashing two aircraft in less than two week to being accompanied by massive tugboats wherever it goes, the last several years have not been kind to Russia’s sole, geriatric aircraft carrier.

Most recently, a 70-ton crane smashed into Admiral Kuznetsov’s hull as the PD-50 floating drydock that housed it sank. The PD-50 incident sparked a new round of speculation concerning Admiral Kuznetsov’s future; while the Kremlin insists that Kuznetsov’s major 2020 overhaul will proceed as planned, observers remain skeptical.

Can Admiral Kuznetsov be saved, and is it worth saving given the colossal costs involved? Here are Moscow’s options.

The Kremlin announced in November 2018 that they intend to recover PD-50, but technical and financial problems abound. According to Russian media reports citing sources “familiar with the situation,” both of PD-50’s cranes are lost and other serious damage was likely sustained. Once recovered, Russian engineers will either have to take the risk of servicing it while afloat or undertake the expensive, harrowing process of bringing it ashore. Repairing PD-50 will take at least half a year, and likely more pending the unforeseen challenges implicit in this massive undertaking.

The other option is to continue the overhaul with a different drydock, but it remains unclear if Russia owns a suitable replacement for PD-50. The Novorossiysk-based PD-190 seemed as one of the few viable candidate fresh off the PD-50 disaster, but has since fallen by the wayside according to United Shipbuilding Corporation (USC) chief Alexei Rakhmanov.

Even before the added costs of repairing the gash in Admiral Kuznetsov’s hull caused by the falling crane, both Russian and western analysts have raised serious questions as to whether or not the aging Admiral Kuznetsov platform can be modernized in a cost-effective way.

At what point does a “deep refit”-- including new turbines and boiler systems, new electronics suite, and new weapons and communications systems-- become so deep that it makes long-term financial sense to simply start from scratch on a modern, more sustainable foundation? Russian state news reported the possibility of the Russian Navy getting a new class of nuclear-powered aircraft carriers by the end of 2030, but development details on the unnamed project remain exceedingly scant.

In the absence of viable domestic options, the only other way to save Admiral Kuznetsov is to service it on a foreign drydock. But after a short-lived spurt of initial speculation, there is no indication that China-- by far the likeliest candidate-- is seriously exploring this prospect.

There is, however, a silver lining to Admiral Kuznetsov’s predicament. The Russian military has been provided with a natural opportunity to reevaluate their strategic priorities; namely, do they really need an aircraft carrier?

Russia, in all of its incarnations, has always been a land power with a completely different set of military priorities from a maritime nation like United States. Whereas the US Navy is designed with the capacity to project force across the world, the Soviet and now Russian Navy exists largely to secure Russia’s vast Eurasian frontiers. The Soviet Union never prioritized the construction of a heavy-class aircraft carrier simply because their naval strategy didn’t need one.

As the Slava and Kirov-class cruisers demonstrated, the Russians are more interested in finding ways to destroy American aircraft carriers than building their own. Even Admiral Kuznetsov was built not to project Russian air power in distant lands, but as a combat platform against American carriers.

Given all the pressing defense expenditures requiring Russian attention, it falls on the Kremlin to decide whether the resources required to maintain what is becoming little more than a prestige symbol could be better spent elsewhere.