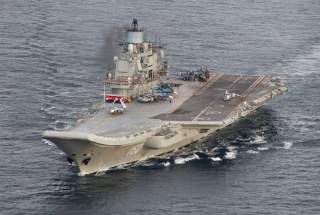 Image: A photo taken from a Norwegian surveillance aircraft shows Russian aircraft carrier Admiral Kuznetsov in international waters off the coast of Northern Norway on October 17, 2016. 333 Squadron, Norwegian Royal Airforce/NTB Scanpix/Handout via Reuters ATTENTION EDITORS - THIS IMAGE WAS PROVIDED BY A THIRD PARTY. FOR EDITORIAL USE ONLY. NORWAY OUT.​

The Los Angeles-Class Submarine: The Navy's 'Old' Sub That Could Sink Russia's Navy