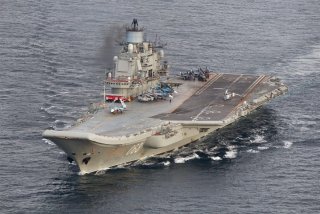 Where is Admiral Kuznetsov? Following a recent series of catastrophic accidents, the fate of Russia’s sole, geriatric aircraft carrier hangs in the balance.

Labeled as a “heavy aviation cruiser” to emphasize its hybrid role between a heavy missile cruiser and carrier, Admiral Kuznetsov was introduced in 1991 after being laid down in the prior decade. Since the Soviet collapse, the carrier has suffered a growing cascade of technical problems; followed by tugboats and billowing black smoke wherever it goes, Kuznetsov’s design flaws resulted in two crashed Russian fighters over the course of the 2016 Syrian campaign.

In 2018, Admiral Kuznetsov’s PD-50 floating drydock sank, causing a 70-ton crane to smash into the carrier’s hull. It was previously estimated that the hull damage from the drydock incident would cost approximately 1 billion dollars to repair, and that’s not considering the cost of the deep weapons, electronics, and equipment refit for which Admiral Kuznetsov has long been overdue.

Just when it seemed as though things couldn’t get any worse for Kuznetsov, a fire broke out inside the ship after a power cable exploded during routine welding work in late 2019. The government estimated the damage from the fire at around 500 million rubles or just over 6 million dollars. It should be noted that other sources, including prominent Russian media outlet Kommersant, allege that the fire caused as much as 95 billion rubles’-- or upwards of 1 billion dollars-- worth of damage. Regardless, the fire amplified what has been a long-growing chorus of concerns about the onerous costs and dubious benefits of saving and refitting Admiral Kuznetsov.

Russian officials continue to insist that Kuznetsov will undergo repairs and return to service in 2022, as originally planned after the drydock incident. “I can reaffirm,” said United Shipbuilding Corporation (USC) chief Alexei Rakhmanov during an interview with a Russian radio station, “that our plans to transfer [Admiral Kuznetsov] have not shifted or changed in any way-- the aviation cruiser will return to the Russian Navy in 2022.”

Rakhmanov proceeded to reassure the audience that the black smoke problem no longer exists:  “considering that all the boilers currently installed on the carrier will be replaced, there will be no more black smoke. There was a technical problem with the fuel controls, which, at that time, was ignored. As of now, the problem has been completely solved.”

The USC chief offered a similarly upbeat assessment at the ARMY 2020 forum later that summer: “we were lucky that the fire did not cause significant damage to the ship. That event will not influence the repair process,” said Rakhmanov.

Admiral Kuznetsov’s 2018 and 2019 disasters spawned a new round of debate among Russian defense commentators and insiders as to whether or not Russia really needs an aircraft carrier. It is unclear how Admiral Kuznetsov fits into Russia’s broader naval modernization plan, which has largely eschewed global power projection in favor of a lean, local force centered around submarines and corvettes. Nevertheless, Russia’s shipbuilding industry is clinging to the 2022 repair and refit timetable.

As of the time of writing, it seems that Admiral Kuznetsov’s fate has been settled: the Kremlin has apparently decided that Russia’s only aircraft carrier is worth saving, even at an exponentially steep cost.