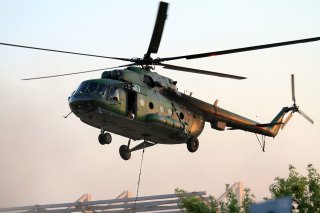 In 2016, Moscow and Beijing signed an agreement to cooperate on the development of advanced civilian helicopters for the Chinese market. The JSC Russian Helicopter Company, which is part of the Rostec state corporation, provided Chinese partners in developing the rotary aircraft.

China has become the largest operator of Russian helicopters in the Asia-Pacific region, and this has come about after years of cooperation between companies in the two nations.

Originally designed as a transport, the Mi-171Sh can be deployed in a range of missions including the airlifting of assault forces, transportation of cargoes, troop fire support, air-to-surface attack, escort of military columns, medical evacuation and combat search and rescue (CSAR) operations. The helicopter, which was designed and developed to operate in all weather conditions day or night, features a five-bladed main rotor, a tail rotor and non-retractable tricycle nose-wheel landing gear. The glassed-in cockpit can accommodate three crew members while the main cabin can house up to 36 troops or up to 12 casualties on stretchers.

This week Defence-Blog reported that China has now placed a new order with the Russian firm to supply an additional 121 aircraft. According to Rostec's annual report, the contract from the government in Beijing as well as private enterprises is for sixty-eight Mi-171 helicopters including the upgrade Mi-171E; eighteen Mi-171Sh military transport helicopters; and fourteen Mi-171 helicopters with VK-2500 engines. An additional twenty-one Ansat helicopters are also part of the deal.

The bulk of the order is for the People's Liberation Army (PLA), but it is unclear in what capacity the helicopters might be used, but it would like be similar to the roles it is employed in with the Russian military. It would likely be used alongside the Chinese built Z-8L transport helicopter.

In August, the Russian military announced that it was upgrading the Mi-171Sh Storm, which would be equipped with guided missiles. However, at the time media reported that the new model wouldn't enter production for two years.

The Mi-171Sh is the latest updated version of the Mi-17, which entered service in the Soviet Red Army in the 1970s and which saw use as an armed gunship version – comparable to the American Bell UH-1 Iroquois (Huey). This enhanced version of the Storm helicopter, which also reportedly features enhanced protection and displays improved striking capabilities, was displayed at the Army-2020 outside of Moscow.