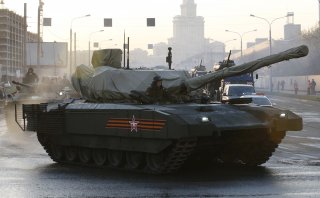 Throughout the Cold War, the Soviet Union had sold its main battle tanks (MBT) to foreign partners around the world, and some of those aging tanks are still in use today. The government of Laos was actually the last operator of the World War II-era T-34—but it is unclear if that Southeast Asian nation will upgrade to the T-14 Armata, and even if Laos doesn’t add the new tank to its arsenal it does look like nations soon could.

This week the Head of Russia’s Federal Service for Military and Technical Cooperation Dmitry Shugayev told the Serbian Glas javnosti newspaper that Russia has started promoting the latest T-14 tanks for export.

“Russian producers are ready to offer potential buyers both air defense systems, such as the S-300 and the S-400, and advanced aircraft and helicopters,” Shugayev explained. “We are preparing the MiG-35 light fighter for sale and are promoting the latest T-14 ‘Armata’ tank.”

The Armata T-14 MBT was first demonstrated during the May 2015 Victory Parade in Moscow, and despite a reduction in Russian defense spending that came with lower oil prices earlier this year, the Russian military has continued with the production of the new tank. It is being overseen by Rostec Corporation, the Moscow conglomerate that specializes in consolidating strategically important companies in Russia’s defense sector.

Russia’s Industry and Trade Minister Denis Manturov told state media earlier this year that Russia was planning to start work with foreign customers of the Armata tank in 2021 and had already received several prior requests.

The T-14 is part of the Armata’s heavily tracked standardized platform, which serves as the basis to develop a main battle tank, an infantry fighting vehicle, an armored personnel carrier and some other armored vehicles. The new combat vehicle is notable in that it features fully digitized equipment, an unmanned turret and an isolated armored capsule for the crew.

Work on the Armata project began in 2010 when the Russian Ministry of Defence terminated work on “Object-195”—the T-95 program. The entire project was seen to be a huge technological leap from Soviet-era military hardware designs and from the ground up the T-14 is very much distinct from past Soviet/Russian tank platforms.

Thus far, the foreign partners haven't been named, however, it is worth noting that the T-14 has undergone field testing in Syria—yet how extensive that testing was is still a matter of debate. According to reports in May, the Russian-built tanks took part in fighting with Syrian-rebels in the province of Latakia and three may have been hit from TOW-2B anti-tank systems.

The reports from Russian media outlet Репортёр (Reporter) even suggested that “one Armata was completely destroyed.” While that hasn't been confirmed it wouldn't be the best selling point for potential foreign partners.