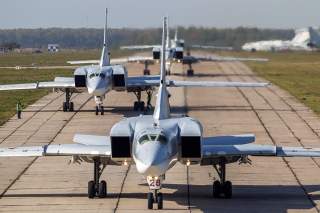 Russia may test its Kh-47M2 Kinzhal aero-ballistic missile onboard the Tupolev Tu-22M3 Backfire bomber, which would greatly extend the number of targets Moscow could hold at risk with the new weapon.

The missile is currently launched from onboard the Mikoyan MiG-31K variant of the Mach 2.83 capable Foxhound interceptor, but the Kinzhal might be better operationally suited for a bomber.

“The MiG-31 has higher supersonic speed than the Tu-22M3 but now that a possibility has emerged to test the missiles aboard a long-range plane, this has to be done. This will raise the combat potential of the Aerospace Force and add might to it.”

While adding the Kinzhal to the Backfire’s arsenal might be operationally useful for the Russian air force, it remains to be seen if the Tu-22M3 is capable of accelerating the weapon into the correct launch parameters.

Though the Tu-22M3 is capable of reaching speeds of about Mach 1.88, it does not quite have the sheer acceleration, speed or altitude of the MiG-31K.

“The tests are needed to see whether it [the bomber] will be capable of accelerating the missile and to get the results,” Oparin said.

“For long-range aircraft pilots, the missile is sooner of the tactical scope but at the same time it has clear advantages by its capabilities of breaching enemy anti-ballistic missile defenses."

The Russians claim that the Kinzhal—which is based on the 9K720 Iskander short-range ballistic missile—is effectively invulnerable to existing ballistic missile defenses because of its maneuverability in flight.

Moreover, the Russians claim the missile is capable of hitting a wide range of targets.

“This is a class of precision weapons fitted with multifunctional combat capabilities making it possible to strike both stationary and mobile targets,” Russian deputy defense minister Yuri Borisov told TASS.

“Specifically, aircraft carriers and cruiser-class warships, destroyers and frigates are potential targets for this weapon.”

According to TASS, the Russian Ministry of Defense is expected to test the Kinzhal missile onboard the Tu-22M3, citing a source in the Russian defense industry.

With a claimed range of over 1,200 nautical miles and a speed of Mach 10, the addition of the Kinzhal missile would significantly boost the Backfire’s capabilities to strike land and maritime targets across Europe, the Middle East, the Asia Pacific and the North Atlantic regions.

While Western experts harbor some doubts about just how operational the Kinzhal missile is, the Russians insist that the weapon is operational onboard the MiG-31K. Moscow claims that its MiG-31K crews have already flown more than 250 training flights with the new weapon.

“The Kinzhal [Dagger] high-precision hypersonic aero-ballistic missile that flies at Mach 10 is already in service with our army in the Southern Federal District, as I have already said,” Russian President Vladimir Putin reiterated again last month during a televised call-in show on June 7.

“If anyone doubts this, they can look and see, we made a point of demonstrating the launch of this missile.”

At the end of the day, aeroballistic missiles are not as complicated or technically challenging to develop as a scramjet powered missile and the Russians have plenty of experience with similar weapons.

Thus, it is likely that the Kinzhal is probably operational in a limited capacity, but eventually the weapon will likely be deployed more widely as it becomes more mature. It is also likely that the Kinzhal will probably be integrated on other Russian strike platforms such as the Tu-22M3, Tu-160 Blackjack or even large fighter aircraft such as the Su-30SM that can reach high supersonic speeds.