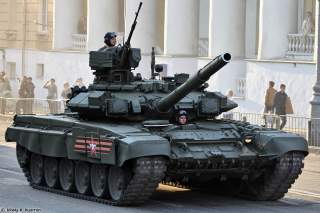 The Russian Army has evolved in profoundly different ways from the United States land forces because of differing geography, historical experience, strategic circumstances and military doctrine. The United States has fought its wars far away from home shores, can deploy abundant airpower with precision-guided weapons, and is disposed towards fielding smaller numbers of highly trained and expensively equipped soldiers.

By contrast, Russia has fought nearly all of its wars along its border, is stronger on land than in the air or sea, and has historically fielded large conscript armies relying on greater volume of firepower and a willingness to incur heavy casualties in order to overwhelm enemy forces.

In some respects, the Russian military has rapidly evolved towards the Western model. Russian ground forces are transitioning to a higher percentage of professional contract personnel. New Russian armored vehicles like the T-14 Armata tank and Kurganets infantry fighting vehicle exhibit a greater emphasis on crew survivability. Moscow is experimenting with deploying smaller and more flexible brigade and battalion tactical groups rather than the large divisions of the Cold War.

Russia’s primary main battle tank is the T-72B3, 1,400 of which are in active service, and 350 similar but better-armored T-90As. The T-72 is far from a super-tank—hundreds were destroyed by Western M1 Abrams and Challenger tanks without loss in the 1991 Gulf War. However, the T-72 has an important quality going for it: it’s much cheaper to operate, and weighs only around forty-five tons, compared to the sixty to seventy tons of Western designs. That means it can roll over many European bridges beefier Western tanks would cause to collapse.

Improvements to the T-72B3 and T-90’s gun, thermal sights and ammunition now give it a chance to penetrate the frontal armor of Western MBT’s at shorter engagements ranges, though Western tanks still benefit from superior sensors and fire control. While T-72s and T-90s tanks may not be favored in a one-on-one engagement, Russia borders many countries that lack such heavy armored forces. Russian tanks could overrun these adversaries before NATO could shift ts smaller number of heavier tanks to the frontline.

Russia tank designers have also invested in improving protection against anti-tank missiles and rockets, which have destroyed far more tanks than armor-piercing shells. The T-72 and T-90 are plastered with bricks of explosive reactive armor (ERA) meant to prematurely trigger incoming shaped charges warheads. Moreover, they are fitted with Active Protection Systems designed to confuse infrared and laser guidance systems, and in some cases even shoot down incoming missiles—features Western tank designs are beginning to incorporate.

The bulk of Russian artillery consists of around seven thousand older 2S1 and 2S3 self-propelled guns, 500 more modern 2S19 Msta systems, and a thousand BM-21 Grad multiple-rocket launcher systems. Russia’s “Next Generation Warfare” tactics involve using electronic warfare and special forces to fix enemy positions so that they can be annihilated with artillery. For example, a three-minute long Grad strike caught a Ukrainian Army battalion on the move, inflicting over a hundred casualties.

Nothing exemplifies the deadly impact of the Russian artillery arms like the BM-30 Smerch (“Tornado”), a truck lugging twelve 300-millimeter rockets each carrying dozens of cluster sub-munitions that can rain down on targets up to sixty miles away—as you can see in this video. In addition to standard fragmentation and armor-piercing bomblets, the Smerch’s cluster rockets can shower a target in thermobaric warheads that ignite a terrifying firestorm—that sucks the oxygen out of the lungs of victims that survive the initial blast of heat.

Many key military targets such as airfields, command centers and fuel depots are situated far beyond artillery range and are well protected against air attack. As a result, Russia has invested in tactical ballistic missile systems that can threaten targets up to 300 miles away.

Russia’s new Iskander tactical ballistic missiles are much faster and more accurate than the Scud missiles Iraq used to bombard targets in Saudi Arabia, Israel and Iran to deadly effect in the 1980s and 90s. Furthermore, they are designed to evade air defense missiles with evasive maneuvers and decoy countermeasures.

While the Iskander’s 1,500-pound conventional warhead is quite fearsome by itself, it can also carry up to a 50-kiloton nuclear warhead. Unlike the United States, Russia still maintains a large stockpile of tactical nuclear warheads that its military believes could be used to “de-escalate” by intimidating adversaries into backing out of a conflict.

Modern U.S. air-defense systems are increasingly oriented to defend against ballistic missiles, as its ground forces haven’t lost troops to manned enemy aircraft since the 1950s.

Russia’s ground and strategic forces can’t depend on air superiority, and thus deploy a diverse array of surface-to-air missiles and interceptors in a multi-layer integrated air defense network that can engage fighters, bombers, cruise missiles and drones at different ranges, speeds and altitudes.

The upper end of Russian air defense is handled by the truck-mounted S-400 Triumfator. An S-400 battery consists of multiple radar, command and launcher vehicles that can track and shoot missiles at up to thirty-six aircraft simultaneously as far as 250 miles away. This means Triumfator batteries in Syria and Kaliningrad can interdict the airspace over air bases in Turkey, Cyprus, Poland and Germany.

Realistically, the S-400’s long-range 40N6 missiles primarily are intended to “push back” larger, slower tanker and radar planes, while smaller and more agile fighters or cruise missiles would be engaged at shorter range using more maneuverable 48N6 and 9M96E missiles. An S-400 battery also employs a low-bandwidth search radar that can potentially track the position of stealth fighters, though not actually lock onto them until they enter short-range.