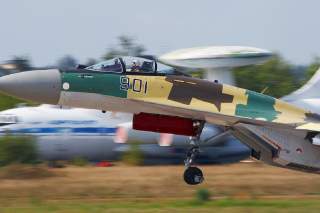 While the IAF is mulling purchases of additional advanced Western jet fighter like the Dassault Rafale, Saab JAS 39 Gripen, the Lockheed F-21 or Boeing Super Hornet, it’s meanwhile turning to its long-running relationship with Moscow to patch up the growing gap in its air defenses—even if that means it risks running afoul of U.S. CAATSA sanctions imposed on countries that import Russian weapons.

Sébastien Roblin writes on the technical, historical and political aspects of international security and conflict for publications including The National Interest, NBC News, Forbes.com and War is Boring. He holds a Master’s degree from Georgetown University and served with the Peace Corps in China. You can follow his articles on Twitter. This first appeared earlier in January 2020.