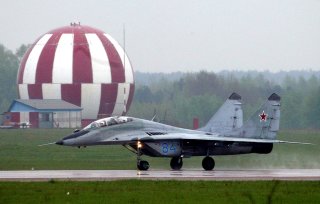 This year's flyover was conducted to honor the U.S. Air Force as the service celebrates its seventy-fifth anniversary.

Some California residents were even treated to a preview of the flyover. Just as the players prepared for the game, a practice run was conducted last week in the airspace over Inglewood, California.

"This year's #SuperBowl is going to be an awesome game, no matter who wins. I won't say who I'm rooting for, but I was pretty pumped for that first-of-its-kind flyover to kick off the game," General CQ Brown, Jr. chief of staff of the United States Air Force, tweeted on Sunday.

Flag on the Play

Santa Monica officials posted a photo of the wrong aircraft from the official Twitter account @santamonicacity on Sunday.

"Just before 3:30 p.m., the @usairforce will flyover #SantaMonica and #Malibu in preparation for the National Anthem performance for #Superbowl LVI at SoFi Stadium," the since-deleted tweet read., Instead of a sharing a photo of Lockheed Martin F-22 Raptor or Lockheed Martin F-35 Lightning II, the post on Twitter included a Russian-built MiG-29. Users were quick to mock the officials for posting an image of an incorrect aircraft.

"If you see one of these over the super bowl, it better be chased by an F-22!" responded one Twitter user.

In fairness to Santa Monica officials, the MiG-29 does bear a passing resemblance to the F-22. Both are twin-engine fighters with a delta-wing configuration.

In addition, the F-22 was born out of the U.S. Air Force's Advanced Tactical Fighter (ATF) program, which was influenced by the development of Soviet aircraft including the Su-27 "Flanker" and MiG-29 "Fulcrum."

The Mikoyan MiG-29 was developed during the late Cold War era and entered service with the Soviet Union's Air Force in July 1982. Despite its age, the aircraft has remained in service throughout the world. It has been reported to be the fifth most common combat aircraft in the world, and as it has been continually updated, it will likely remain in service for decades to come.

Despite that fact, it is unlikely one will ever be part of a Super Bowl flyover.