To Save Millions, Biden Should Break Putin’s Black Sea Blockade 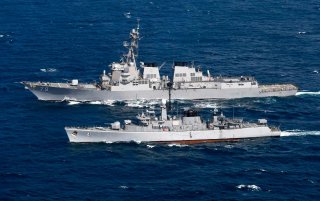 As Cold War tensions escalated in 1948, the Soviet Union imposed a blockade on West Berlin, then controlled by the United States, the United Kingdom, and France. Mass starvation loomed among the population of the cut-off and war-devastated city. President Harry Truman, in concert with U.S. allies, risked a military confrontation with the Soviets and authorized an airlift operation to fly food and supplies into the city. After nine months of round-the-clock humanitarian flights, Moscow ended the blockade.

Vladimir Putin’s aggression against Ukraine, including the closure of the ports of Mariupol and Odessa, has now created the reverse crisis—preventing the export of Ukraine’s wheat to the world market, driving up prices on drastically-reduced supplies, and depriving the countries in the Middle East and Africa of affordable access to the food supply.

On March 24, President Joe Biden and G-7 leaders discussed the coming food crisis that will raise prices beyond the reach of huge populations. Biden promised increased output from U.S. and Canadian farmers to offset the loss of Ukraine’s grain. But there was no mention of efforts to ensure that the Black Sea, an international waterway, would be reopened to allow grain exports to resume.

A few days later, David Beasley, executive director of the World Food Programme (WFP), warned that Ukraine has turned “from a breadbasket to a bread line” as the disrupted food-chain system denied sustenance first for Ukrainians, then for foreign populations. “The last thing the WFP wants to do is take food from hungry children to give to starving children.”

“Putin’s war has cut off critical sources of food … Ukraine has 25 million tons of Ukrainian crops that are not being exported because of the invasion … If those tons don’t get to market, an awful lot of people in Africa are going to starve to death because they are the sole supplier of a number of African countries.”

He again called on American farmers—“the breadbasket of democracy”—to step up and make the difference. But he remained silent on the appeals for action to reopen the Black Sea to world commerce and avert mass starvation in several African nations.

When President George W. Bush learned of the AIDS epidemic sweeping sub-Saharan Africa in the early 2000s, he launched a successful global effort to address it, and his humanitarian initiative remains a major positive achievement in his legacy. While it cost hundreds of millions of dollars, it did not risk the kind of major conflict Truman had to deal with when he decided to undertake the Berlin Airlift.

Biden could even propose a joint NATO-Russia Black Sea humanitarian operation to facilitate Ukraine’s grain exports to the world. Of course, this would be a transparent face-saving gesture to Putin, since he would merely have to end his blockade of Ukraine’s ports to eliminate the problem. But, if he is considering the need for an off-ramp to end Russia’s ill-fated aggression—for which there is no evidence so far—the offer could open the door, as long as the end result is that Ukraine recovers all of its sovereign territory.

The initiative would also help heal the rift between NATO member Turkey and the rest of the alliance, after the United States canceled its participation in the F-35 fighter aircraft program because of Turkey’s earlier purchase of Russia’s S-400 air defense system. Turkey would have to cooperate with a Black Sea initiative since it has legal control of all access under the Montreux Convention of 1936, especially in wartime.

So far, Turkey has earned praise from Washington for its role since Russia’s invasion. According to Pentagon spokesman John Kirby, “The government of Turkey has been very responsible in how they’ve managed their Montreux responsibilities -- the entry into and the exit from the Black Sea.” Turkey might be more willing to allow entry for U.S. warships on an avowedly humanitarian, rather than combat, mission.

Conceivably, Washington could also seek the imprimatur of the United Nations General Assembly under its Responsibility to Protect doctrine which authorizes military intervention to avert a humanitarian catastrophe.

A successful Black Sea operation of this nature would also send a strong message to China, which has increasingly aggressive designs on Taiwan and endorses Russia’s claims on Ukraine. It would demonstrate Washington’s ability and willingness to break an attempted Chinese blockade in the Taiwan Strait. Such a deterrent signal is essential given the continuation of U.S. strategic ambiguity under the Biden administration despite his personal expression of intention to defend Taiwan.

Joseph Bosco served as China Country Desk Officer in the Office of the Secretary of Defense, a nonresident senior associate at the Center for Strategic and International Studies, and a nonresident fellow at the Atlantic Council of the United States. He is presently a member of the advisory board of the Global Taiwan Institute and a fellow of the Institute for Corean-American Studies (ICAS).