A Seawolf-Class Submarine Just Collided With a Mysterious Object 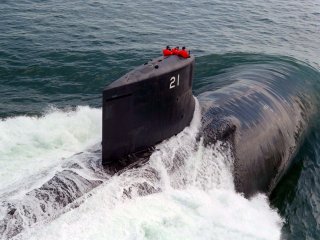 The Seawolf-class fast-attack submarine USS Connecticut (SSN 22) collided with an “unknown object” while submerged in the waters of the Asia-Pacific region, according to a press statement issued by the U.S. Pacific Fleet Public Affairs office.

“The submarine remains in a safe and stable condition,” the statement added. “USS Connecticut’s nuclear propulsion plant and spaces were not affected and remain fully operational. The extent of damage to the remainder of the submarine is being assessed. The U.S. Navy has not requested assistance. The incident will be investigated.” Navy sources later told U.S. media that the Connecticut’s weapons systems are undamaged.

Unnamed U.S. officials added that the incident occurred in international waters in the South China Sea while the Connecticut was conducting routine operations. It was revealed that eleven sailors were injured as a result of the collision, with unnamed Navy officials telling the Associated Press that two seamen sustained “moderate” injuries while about nine others suffered minor injuries including “scrapes and bruises.”

The circumstances surrounding the incident remain unclear. AP’s sources stated that the Connecticut did not collide with another submarine, but this has not been officially confirmed by the Navy or corroborated by any other sources. AP’s sources suggested the object of collision could have been a sunken vessel or container of some type, though it is not immediately clear what they are basing their assessment on. As noted by USNI news, the last confirmed instance of a submerged U.S. submarine colliding with an underwater object is the 2005 USS San Francisco incident, when the Los Angeles-class nuclear submarine hit a seamount at full speed. One sailor died as a result of the collision.

Washington’s primary rival in the Asia-Pacific region seized on reports of the Connecticut’s collision. "China is deeply concerned over this incident. The US and other involved countries must provide information about relevant details, including the exact location of the incident, the goal of this mission, details on the object of collision, and whether there was any radiation leak or other environmental damage," said Chinese Foreign Ministry spokesman Zhao Lijian on Friday. "The US delays the publication of information on this incident and tries to cover it up. Their actions are irresponsible and not transparent," Zhao added. The Chinese spokesman tied the Connecticut incident to the recent establishment of the AUKUS partnership, which involves the sale of U.S. nuclear submarine technology to Australia. The partnership, aimed in large part at countering China’s growing military presence in the Indo-Pacific region, has elicited a wave of heavy rebuke from Beijing. Experts have warned that the recent spike in Chinese military provocations against Taiwan, highlighted with the reported intrusion of nearly 150 People’s Liberation Army Air Force (PLAAF) aircraft into the island’s air defense identification zone (ADIZ), comes as a form of retaliation against the passage of the AUKUS partnership.