Setbacks Aside, the First Ford-Class Super Carrier is Nearly Complete 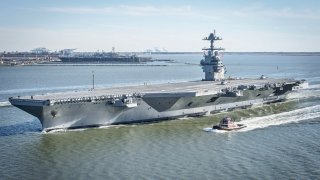 In a press release provided to the National Interest, the United States Navy announced that the lead ship of the new Gerald R. Ford-class supercarriers made a significant step towards full operational readiness.

“On December 22, the 11th and final Advanced Weapons Elevator (AWE) aboard USS Gerald R. Ford (CVN 78) was turned over to the ship’s crew,” the press release explained.

Fully functioning weapon elevators are vital to the ship, allowing aircraft and munitions to travel from the carrier’s magazine in the belly of the hull to the flight deck. “This is a significant milestone for the Navy, ship, and her crew,” Rear Adm. James P. Downey, Program Executive Officer for Aircraft Carriers, stated. “With completion of this final AWE, we now have the entire system to operate and train with.”

The Gerald R. Ford-class is the most advanced class of ships the United States Navy has ever built and incorporates many new technologies. In addition to the more advanced weapons elevator, the Ford-class is powered by a pair of smaller, more simple nuclear generators that provide approximately twenty-five percent more electrical power than previous designs.

The Navy expects the Ford-class to serve for around ninety years, and the carrier’s extra energy output anticipates immature technologies that the Navy may incorporate into the class in the future.

Despite the Ford-class advanced design, the class has suffered from several shortcomings. For example, problems with the carrier’s electromagnetic aircraft launch and arresting gear have proven a headache for the Navy. In addition, crew accommodations—toilets specifically—have repeatedly clogged, forcing the Navy to periodically flush out the sewage system with an expensive acidic cleaning solution.

The press release describing the Ford’s recent activity ended on a positive note. “The end game is always operational readiness,” Rear Adm. Downey explained, “and Ford is on track to complete this PIA (Phased Incremental Availability period) on schedule, conduct sea trials, and to move on to follow on tasking.”

Though its been an uncertain and occasionally imperfect road, the first of the United States’ Gerald R. Ford-class supercarriers is approaching completion.