Shortest War Ever? The Anglo-Zanzibar War Over in Less Than 40 Minutes 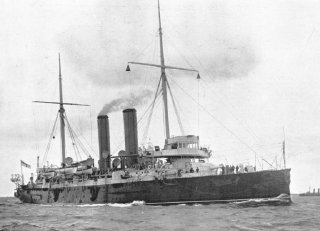 Military leaders don't actually like wars. Wars disrupt training and no one can truly predict an outcome. But when war does come the leaders all hope for a quick and decisive victory. None was quicker or more decisive than the Anglo-Zanzibar War of 1896—from start to finish it lasted less than 40 minutes. It was a David vs. Goliath story, but in this outcome Goliath won the day.

The origins of the war could be traced not to Zanzibar or even London, but rather more than a decade earlier to Berlin, which hosted the Berlin Conference of 1884–85—also known as the Congo Conference. The goal of the conference was to formalize European claims to territory in Africa. While initially Germany's Chancellor Otto Von Bismarck didn't see much interest in a distant empire, as he was more concerned about the balance of power in Europe, he also felt Germany shouldn't be left out of expanding its influence on the global stage.

Great Britain had also been a traditional ally of Prussia throughout the 18th and early 19th centuries, and with a unified Germany, hoped to find common cause. The signing of the Heligoland-Zanzibar treaty drew up spheres of influence between the two powers in East Africa. The two powers did this despite the fact that the Sultan of Zanzibar had claimed to rule both the island of Zanzibar and the mainland territory. The British became protectors of Zanzibar when Germany was given the land east of Lake Tanganyika.

Hamad bin Thuwaini, who was a supporter of the British cause, was installed as Sultan in 1893, and things went smoothly for three years until his sudden death. Rumors have abounded ever since that he may have been poisoned by his cousin Khalid bin Barghash—who it happened moved into the palace almost immediately and declared himself Sultan.

Barghash thought he could stand up to the British Empire and declare sovereignty. While this story may sound similar to others who dared oppose the British, Barghash was no William Wallace or Mahatma Gandhi—the self-declared Sultan was a supporter of the lucrative slave trade that the British had sought to stamp out. That policy conflicted with Barghash's interests and he likely believed the British would back down after he barricaded himself in the palace with about 3,000 defenders.

The British did not back down.

Instead an ultimatum was sent, and it was a true display of "gunboat diplomacy" in the most literal sense. Three cruisers, two gunboats with 150 Royal Marines and another 900 Zanzibari soldiers mustered in the harbor.

Surprisingly, even that wasn't enough to convince Barghash the cause was a hopeless one. Perhaps he felt his superior numbers of soldiers would deter the British. Armed with artillery, a handful of Maxim machine guns, a Gatling Gun, a seventeenth century bronze cannon and two 12-pounder field guns the Sultan was determined to make his stand.

On August 27, 1896 at 8am the Sultan was once again given an ultimatum. If he didn't agree to British demands they would open fire. He refused and at just after 9am the British guns began to shell the palace. The outcome was never in doubt from that moment. Within minutes Barghash's artillery was destroyed—and all he and his men could do is wait out the British bombardment.

In addition to shelling the wooden palace, the Royal Navy also targeted Sultan Khalid bin Barghash's "fleet." It actually was just one ship, the luxury yacht Glasgow, which had been a gift to the Sultan by Queen Victoria. It was certainly no match for modern warships and was quickly sunk – while the HMS St. George rescued the crew.

After just 38 minutes, Barghash's dedicated soldiers proved they weren't so dedicated after all and they fled the palace. The Sultan's flag was pulled down and the war was over. The shortest war in history resulted in the wounding of one British sailor, while the pro-Barghash forces lost some 500 men.

That afternoon Ḥamud ibn Moḥammed was named Sultan. He agreed to the British terms, and never questioned the British demands concerning the abolition of slavery.

As for Khalid bin Barghash, he and his close circle of supporters had fled, possibly just after the shelling began, to the German consulate and requested asylum. He was smuggled off the island to German East Africa, where he received political asylum. The former Sultan, who reportedly never renounced his claims, was captured by British forces when the German colony's captured city of Dar es Salaam was surrendered in 1916. The Sultan for a day was exiled first to Seychelles and later to Saint Helena, the South Atlantic Island where the exiled French Emperor Napoleon had spent his final years, before being allowed to return to East Africa. He died in Mombasa in 1927.

Britain's control over Zanzibar continued for another sixty-seven years, until the protectorate status was terminated in 1963. A year later Zanzibar merged with the Republic of Tanganyika—which had been a British protectorate after the First World War ended Germany's control of East Africa. The combined country became Tanzania.