Should South Korea Participate in China's Belt and Road? 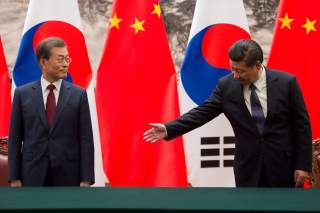 Last year, South Korean President Moon Jae-in declared that the Republic of Korea wanted to participate in the Chinese One Belt One Road (OBOR) Initiative in Chongqing. And this year, Liaoning province decided to join China’s OBOR link to the Korean Peninsula. Although South Korea is an important U.S. ally, why would it want to participate in the Chinese OBOR? There are four reasons.

First, connecting South Korea to the rest of Eurasia by the OBOR has symbolic meaning for South Koreans. Since the outbreak of the Korean War nearly seventy years ago, South Korea has been disconnected from the continent, effectively becoming an island since it could no longer access North Korean territory. Many South Koreans have sought to reconnect with the rest of Asia to escape from their isolation, where the country felt more similar to Japan and the United Kingdom than a country with a one-thousand-year-old culture and a shared history with their northern neighbors. South Korean constitutional law even includes North Korean territory under South Korea’s domain (Article 3). Thus, the present division between the two Koreas brings many contradictions to the forefront of South Korean society. If South Korea can connect with North Korea through China’s OBOR, then Seoul can overcome these contradictions and fulfill the Korean people’s long-held wish.

Second, President Moon expects that participation in the initiative will mitigate tensions between South Korea and North Korea by creating joint economic opportunities. If South Korea connects with China through North Korea, South Korea can use multimodal transportation (the ability to transport cargo by land, air and sea). This will increase the efficiency of South Korean trade and its partners will become more varied than before. But South Korea would need to rebuild North Korea’s train infrastructure because it is too decrepit to use. After rebuilding the train system, South Korea can resume business with North Korea at the Kaesong industrial complex and Kumgang mountain. These investments and a new, broader economic relationship could help mitigate tensions on the Korean Peninsula.

Third, South Korea seeks to pioneer a new emerging market and expand its economic area. Last year, President Moon declared that the OBOR initiative and Moon’s new policies toward Southeast Asia and North Asia have a close relationship. "I am confident a link between the Belt and Road Initiative and New North, New South policies will lead to peace and joint prosperity in the region,” he said. If South Korean trains connect with China’s railway system, South Korea can export its commodities to Central and Southeast Asia more easily. This is especially true since President Moon is expanding South Korea’s economic ties with ASEAN as much as the other countries who surround the Korean Peninsula like Japan, China and Russia.

In the past decade, ASEAN became the second largest market to South Korea after China. Given that 24.8 percent of South Korea’s exports go to China, Seoul needs to expand into other markets to reduce its economic dependence, and therefore its political vulnerability, vis-à-vis Beijing. Indeed, South Korea had been confronted with Chinese political and economic pressure when Seoul decided to deploy the United States’ THADD system in response to North Korean missile threats. After political pressure from China, South Korea wants to focus on developing new markets, so participation in the OBOR is attractive to Seoul.

Fourth, South Korea can get energy resources more easily, variously and cheaply than before. South Korea is the third largest importer of liquefied natural gas (LNG) after Japan and China. And South Korea will soon buy even more natural gas than before because President Moon is planning to replace South Korean nuclear and coal power plants with natural gas and renewable energy. But LNG is more expensive than pipeline natural gas (PNG)—South Korea currently has to buy natural gas in its liquefied state because it can’t access the pipelines across North Korean territory. If South Korea can import PNG from Central Asia via China or from Russia, it can remarkably reduce the cost to import natural gas. (80 percent of South Korean gas imports currently come from five countries, with a high dependence on the Middle East and Australia.) South Korea needs alternatives for energy imports so they cannot be blocked or hindered by another country’s resource nationalism, a financial crisis or security reason. Through the One Belt One Road initiative, South Korea can raise the funds to build the pipeline and connect with Central Asia and other countries too.

The above four reasons are why South Korea wants to participate in China’s OBOR initiative, but it should not do so lightly. There are three consequences that Seoul must consider before it participates in the OBOR.

Second is a security risk that is related to trust and leverage. If South Korea participates in China’s OBOR, Seoul may be confronted with a troubling security situation. It is true that South Korea can curtail the cost of energy imports by using Russian or Central Asian pipeline infrastructure, but should South Korea put its trust and energy security in the hands of North Korea? As has happened before, North Korea can change its relationship with Seoul based on how it perceives its national interest. This creates a possibility that Pyongyang can put a lot of pressure on Seoul by stopping energy supplies to the South.

Third, Moon’s foreign policy could fail when South Korea participates in the OBOR initiative. What President Moon expects from the initiative is for OBOR to be the connection between his New Southern and New Northern policies, thus expanding South Korea’s economic and diplomatic influence. But the top nine ASEAN countries with the highest trade volume with South Korea are not participating in the One Belt One Road project, or have suspended or canceled their projects. In truth, most ASEAN countries have a skeptical view of this initiative. In August, Malaysian prime minister Mahathir Mohamad canceled the Chinese-funded $20 billion East Coast Rail Link (ECRL) and pipeline project. Singapore has been wary about Chinese projects like potentially building a canal or railway to bridge the Kra Isthmus and does not have any OBOR-related projects on its territory. Pakistan and Thailand also reconsider OBOR initiative and canceled it. Vietnam says it supports the initiative but it doesn’t participate in the initiative substantively. The most relevant countries with South Korea in ASEAN are hesitant to participate in the initiative.

It is a similar situation with Moon’s New Northern policy. Moon’s New Northern policy is to cooperate with Russia, Mongolia and Central Asia to focus on the various fields such as energy, railway transit and the Arctic route. To attain this goal, South Korea wants to connect its New Northern policy with OBOR by connecting the Trans Korea Railway (TKR) and Trans-China Railway (TCR) to access Central Asia and Europe. But it is not a good idea for South Korea because Russia’s Trans-Siberian Railway (TSR) is a better choice than TCR to approach this region. TCR is expensive, complicated, and less efficient than TSR since the basic fare for TCR is 30 percent higher and Beijing gives preferential treatment to Chinese companies over foreign ones. Further, crossing each Central Asia border requires strict and time-consuming custom clearance and inspections. Yet the biggest problem is that TCR has a different gauge system which is not compatible with Russia and Central Asia. It means that it is necessary to switch trains at least once when the train approaches the border. It is a slow process, especially since the train stations on the border don’t have enough freight containers, especially in Central Asia. These are the reasons why South Korea’s New Southern and New Northern policies and the OBOR initiative are not compatible with each other.