Should the U.S. Navy Feel Threatened by China's DF-100 Missile? 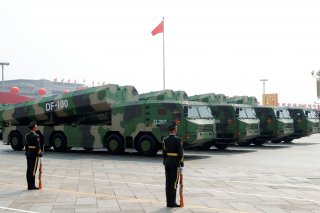 Key Point: Land-based missiles to counteract the U.S. Navy will be the Chinese form of sea power.

So China’s People’s Liberation Army (PLA) unveiled new weaponry during its October 1 military parade? Color me gobsmacked. If China’s rise to martial eminence has shown one thing, it’s that PLA commanders and their political overseers delight in surprising and trolling Western observers. They excel at developing new hardware in secret, then springing it on the world and watching the ensuing gabfest consume the China-watching community.

And sure enough, launchers bearing “DF-17” and “DF-100” missiles—weapons both supposedly capable of superfast speeds yet hitherto unknown to outsiders—rumbled through Tiananmen Square to help commemorate the seventieth anniversary of the founding of the People’s Republic of China. (The DF-41 intercontinental ballistic missile also made its public debut on October 1, but Westerners have known about that one for some time.) Alternatively, foreign intelligence services knew about these “birds” but opted not to disclose it in open sources for fear of revealing how they came by the information.

It’s unclear whether the DF-100 is a cruise or ballistic missile. The “DF” nomenclature seems to indicate it flies a ballistic trajectory, while Jane’s depicts the bird as a supersonic cruise missile. It may straddle the difference between ballistic and sea-skimming missiles, arcing high into the atmosphere but following a flatter trajectory than a ballistic missile. It would come at U.S. Navy task forces from yet another axis, augmenting anti-ship cruise and ballistic missiles and undersea munitions such as torpedoes or sea mines. Whatever the case, the new anti-ship missile purportedly reaches hypersonic velocity, meaning five or more times the speed of sound, during at least part of its flight. That boosts its chances of getting through U.S. Navy defenses. Defenders would have little time tor more than snap shots.

Notes the South China Morning Post in its reportage on the parade, the DF-100 boasts a firing range estimated at 2,000-3,000 km (roughly 1,200-1,800 statute miles) and is “mainly designed for big targets at sea.” By big targets the SCMP chroniclers presumably mean U.S. or allied aircraft carriers. But such a weapon could likewise target amphibious transports, escort cruisers or destroyers steaming in company with flattops, or logistics ships that ferry vital fuel, munitions, and stores to the fleet as it plies the sea.

So let’s not assume too much about the purposes PLA rocketeers have in mind for their new toy. “Anti-access” defenses can defeat American purposes by assailing softer targets than carriers or surface combatants. If PLA defenders have that option, why not exercise it? The brawniest fleet accomplishes little without logistical support. Pounce on the U.S. combat logistics fleet and you starve the battle fleet of stores; starve the fleet of stores and it goes away before long. The PLA might well tread the path of least resistance to tactical, operational, and strategic success.

Three-pointers on how to interpret the latest revelations. First, martial might is basic to the “Chinese dream,” President Xi Jinping’s statement of national purpose. China watchers sometimes mistake the Chinese dream for an economic program, and amassing wealth is certainly part of it. But wealth is a means to the end of great power, not an and in itself. Communist China aspires to fulfill its dream, and banish bad memories of its “century of humiliation” at the hands of seaborne conquerors, by achieving “the great renewal of the Chinese nation.”

Tightening the sinews of national power—including military power—is part and parcel of Xi’s reverie. Hence the prominence of martial pageantry on anniversaries such as October 1.

Second, China’s proclivity for guile and deception was on display at the military parade, as on all such occasions. Notes the Center for Strategic and International Studies: “The People’s Republic of China is in the process of building and deploying a sophisticated and modern missile arsenal, though one shrouded in secrecy due to intentional ambiguity and unwillingness to enter arms control or other transparency agreements.” The approach is true to form. China’s way of diplomacy and war has been predicated on deception as long as there has been a China.

Strategic grandmasters from Sun Tzu to Mao Zedong have harped on its value, portraying evasiveness as a way to hold down the costs, perils, and duration of war when China is the stronger contender, or to turn the tables on the strong when China is the lesser contender and needs to prolong the struggle. It is a fixture in Chinese statecraft no matter the situation or correlation of forces. Sun Tzu exhorts commanders and sovereigns to keep foes scurrying about, while Mao proclaims that all warfare is grounded in deception. Small wonder Beijing has made a habit of trumpeting once-clandestine military projects when the time is ripe. It’s a way of molding perceptions of Chinese martial prowess, making China appear purposeful and powerful, while at the same time keeping opponents guessing.

And third, military planners think in terms of “operational factors,” namely space, time, and force. To prevail in a given theater, commanders must stage enough force in a particular geographic space for long enough to accomplish the goals entrusted to them by senior military and political leadership. That might mean mustering enough strength to defeat hostile forces on the scene; it might mean deploying just enough force to balk an opponent’s strategy and stave off defeat. Denying an enemy leisure and elbow room limits its ability to bring armed force to bear, fulfilling its mission. It confers operational and strategic advantage on the competitor able to control these operational factors.

So has it always been. Sea captains dreaded venturing within reach of shore fortresses during the ages of sail and steam. Gunnery ranges were short, meaning the operating space was small. Gun projectiles traversed the operating space within seconds, meaning warning times were short before hostile gunfire crashed into a warship’s hull. Worst of all, fortresses mounted guns that were larger than a ship’s, boasted more firepower, and had bigger stockpiles of ammunition from which to reload and keep firing. To accomplish their goals, fleets commonly had to operate within zones where space, time, and force were all the adversary’s allies. Hence the adage attributed to Lord Horatio Nelson, Great Britain’s god of naval war: “a ship’s a fool to fight a fort.”

Anti-ship ballistic and cruise missiles—latter-day counterparts to cannon fired from land—replicate this dynamic from the age of close-range gunnery. Precise, fast-flying, long-range missiles such as the DF-100 compress space and time for China’s offshore antagonists. PLA firepower could rain down at an instant’s notice if a U.S. or allied fleet ventures within hundreds of miles of Asian seacoasts. It’s as though the fleet is prowling a few miles offshore rather than operating in the vastness—and relative sanctuary—of oceanic space. Hence the effort and resources Beijing has poured into anti-access defenses. It’s an operationally sound way of sea war.

We often debate whether Communist China thinks like an open-ocean maritime power in the mold of the U.S. Navy, Britain’s Royal Navy in its heyday, or the Dutch, Spanish, or Portuguese navies deep in the recesses of the age of sail, or whether it thinks like the coastal-defense power it was from the inception of the People’s Republic seventy years ago. It’s an important topic. The answer could reveal whether Beijing entertains defensive or offensive ambitions, and thus whether it will keep the PLA Navy close to home or operate it across the seven seas as a free-range navy.

Yet the question is less and less important as anti-ship and anti-air weapons and sensor technology matures, bringing more and more oceanic space within reach of “coastal” defenses. An 1,800-mile radius from mainland shorelines encloses an awful lot of sea space, including expanses that mariners regard as “blue water”—the high seas where great navies roam. In a sense, then, the family of missiles PLA weaponeers have fielded in recent decades—including the DF-100—lets China have it both ways in Pacific waters, and to a lesser degree in the Indian Ocean. The PLA can remain true to its tradition of coastal defense while at the same time deploying a blue-water navy.

If so, Beijing may ease into its new standing as a globe-spanning sea power rather than undergo a wrenching transition. Westerners may discern a disjuncture in Chinese maritime strategy where none exists. That’s a sobering thought.

James Holmes is J. C. Wylie Chair of Maritime Strategy at the Naval War College. The views voiced here are his alone. This piece was originally featured in November 2019 and is being republished due to reader's interest.