Is the Sig Sauer MCX Rattler the Best .300 Blackout Pistol? 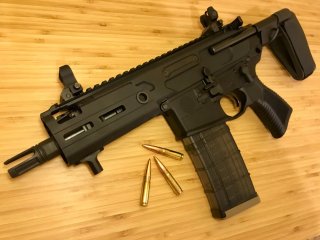 Sig Sauer has done it once again. The Sig Sauer MCX Rattler, chambered in 300 Blackout, is a fantastic platform with a price tag that made me cry on the inside. It’s a firearm that wins huge on style points but is held back by one issue for me. It’s certainly worth buying, but a disclaimer should be attached to it.

Let me preface this by saying that I don’t go for pre-built rifles or AR pistols too much these days since I really enjoy putting things together and getting a little bit more control in the building process. It usually ends up a little cheaper too.

I purchased the pistol configuration of the MCX Rattler since I wasn’t keen on waiting on a tax stamp for a short-barrelled rifle (SBR). Still, the Rattler looks extremely clean. It’s compact and easy to store in a backpack or even under the seat of a car. I personally found myself actually keeping it beside my bed since the short barrel length (5”) is perfect for maneuvering the tight hallways and doorways of my house. It comes furnished with a blocky M-LOK handrail that looks really good as well as a stabilizing brace which is frankly trash. It’s unstable and wobbly. I can’t stand it. Aside from that, every non-actuating part of this AR pistol is solid.

I do want to talk about the trigger first though. It’s pretty terrible. It’s clunky, gritty, and heavy. I do not enjoy a 9lb trigger pull on my rifles or AR pistols, or basically any firearm really. It makes shooting accurately so much tougher at longer distances. This is one of those issues that really bogs this rifle down. I’m definitely going to have to swap it out to make it bearable.

If you’re looking past that though, the accuracy is actually pretty good. I threw on a little red dot sight and was really only trying to engage at fifty yards. Groups were solid with three-inch groups while doing some casual shooting. Out past that, I was able to maintain 3 MOA while seated and focusing hard. I usually won’t go out past that if I'm not using a Low-Powered Variable Optic (LPVO) or some kind of magnified optic and a scope frankly just looks goofy on this thing.

Outside of that, I don’t know what else I could ask for. It’s ergonomic, maneuverable, and super quiet with subsonic ammo and a suppressor. Plus this gun was originally made for military and special operations so it definitely scratches that itch. I was able to find a practical use, but there are some significantly cheaper options out there, even if they don’t look quite as cool. I won’t say it’s a straight-up go and buy this right now, but I’m pretty sure you won’t be disappointed if you pull the trigger on this one.