Sitting Ducks: Why Russia’s Tanks Have Been So Vulnerable in Ukraine 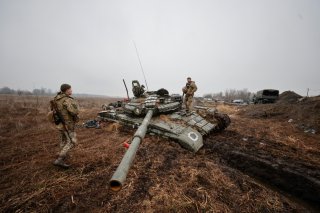 Ukrainian anti-armor weapons have destroyed many Russian armored combat vehicles and attacking tanks, which continues to generate discussion about the effectiveness of hit-and-run ambush tactics with shoulder-fired anti-armor weapons. Does Ukraine’s success indicate that tanks may actually be more vulnerable in warfare than had previously been thought?

A battalion commander and land warfare expert who led the charge across the desert to kill Iraq’s Republican Guard in Operation Iraqi Freedom says Russia’s problem is not so much that its tanks are unexpectedly vulnerable, but rather its inability to effectively use tanks as part of an integrated combined arms maneuver operation.

“I think the problem that the Russians have is the lack of combined arms warfare in order to synchronize the efforts of artillery, their observation, and reconnaissance plan surveillance,” Lt. Col. Scott Rutter (ret.), CEO of Valor Network and former Army battalion commander in Iraq, told the National Interest in an interview.

Rutter explained that in order to be effective and survive, a tank needs to operate in coordination with other key assets. This often includes the need for dismounted soldiers to operate alongside or in front of advancing tank units to ensure that the tanks are less vulnerable to incoming fire from anti-tank guided missiles, rocket-propelled grenades (RPG), or other anti-armor weapons that dismounted adversaries might have.

“A tank out there completely alone without infantry and without being part of a combined arms operation is an accident waiting to happen. That's the biggest fear of any tanker out there … [an] enemy dismounts out there without its own dismounted force,” Rutter explained.

A tank’s firepower is fully leveraged with a trained crew and accurate, long-range sensors needed to identify targets for destruction. Tanks can engage buildings, bunkers, and enemy armored units with unprecedented power and effectiveness if they are properly integrated with a combined arms maneuver operation. This involves artillery, dismounted soldiers, surveillance, and air support of some kind. Perhaps most importantly of all, Rutter said a tank needs to sustain its maneuverability to optimize attack effectiveness.

“When we were going to Baghdad, when we were stationary, we became extremely vulnerable. And at that point we have to keep up the momentum, you have to be able to adapt then react,” Rutter said.

Rutter went on to explain that the Russians appear to be almost completely unable to execute an effective combined arms maneuver.