Skyborg: The Air Force's Robot Wingman That Could Fly Into Battle with an F-35 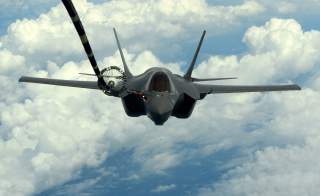 The U.S. Air Force is firming up its plans for expendable robot wingmen that can accompany human fighter pilots into combat.

The flying branch has settled on a name for the drone-wingman program. Skyborg. And it might be close to making up its mind on an airframe, too.

The Air Force Research Laboratory is handling the project. It wants a combat-capable prototype to be ready as early as 2023, according to a March 2019 announcement from the Ohio-based lab.

"This is our first step in determining what the current state of the art is from a technology perspective and from a systems-engineering perspective," Ben Tran, the Skyborg program manager, said in a statement.

Drone wingmen have been in development for years. "The idea of a robot wingman is that it can keep pace with manned planes, but be tasked out for parts of the mission that you wouldn't send a human teammate to do," Peter W. Singer, author of Wired for War, told The Daily Beast.

In February 2019, Boeing's Australian subsidiary unveiled the so-called "Airpower Teaming System." The most striking part of the new system is a 38-foot-long, jet-powered drone that Boeing said could carry weapons and sensors and fly as far as 2,000 miles in formation with manned planes.

Australia could acquire the new drone to fly alongside its F/A-18 and F-35 fighters and E-7 radar planes.

China and Japan are also working on wingman drones. A mock-up or prototype of China's 30-feet-long Dark Sword drone first appeared in public in an undated photo that circulated on-line in mid-2018.

Meanwhile, California drone-maker Kratos has teamed up with AFRL to develop a wingman drone for U.S. force. The roughly 28-feet-long, jet-powered XQ-58 demonstrator flew for the first time over Yuma, Arizona on March 5, 2019, AFRL announced.

It's probably no coincidence that AFRL announced Skyborg shortly after the XQ-58's first flight. The Kratos drone could form the basis of the Skyborg program. The drone in the computer-generated imagery accompanying AFRL's Skyborg announcement bears a striking resemblance to the XQ-58.

To keep up with a manned fighter, a drone wingman would need to be fast and maneuverable. And to keep down the human pilot's workload, the drone would also need to be highly autonomous.

Just how autonomous the designs are could help to determine how successful they are on the marketplace -- and how effective they might be in combat. The more autonomous a particular wingman drone is, the more likely it is smoothly to integrate with busy human pilots.

Fighter pilots already are "task-saturated," to borrow a military term. Despite advancements in avionics that can simplify a fighter cockpit, a pilot still keeps busy flying his plane, monitoring his sensors and the air space around him and communicating with his wingmen and troops and battle-managers on the ground.

If a pilot also has to directly control potentially several drone wingmen -- feeding them navigation waypoints, regulating their sensors and commanding them to fire weapons -- he might get overwhelmed and, say, fail to notice an incoming enemy fighter.

Brian Laslie, a military historian and author of the The Air Force Way of War, said he spoke to some pilots about the wingman-drone concept and got a mixed response.

"I asked around and the general consensus seems to be the idea has merit," Laslie told The Daily Beast, "but I think there is some hesitancy in certain communities from full acceptance. The phrase, 'I am already task-saturated' came up more than once."

But if a wingman drone is highly-autonomous, it could relieve a pilot of the burden of micromanaging the unmanned fighter.

A Valkyrie could follow commands from a nearby fighter pilot, the crew of a surveillance plane or even a controller on the ground. "Command-and-control options include both ground-based and airborne," Kratos explained.

AFRL wants Skyborg to feature a "dialable" artificial intelligence. A pilot would decide just how autonomous their wingman drones should be on a given mission.

"Skyborg is a vessel for A.I. technologies that could range from rather simple algorithms to fly the aircraft and control them in airspace to the introduction of more complicated levels of A.I. to accomplish certain tasks or sub-tasks of the mission," stated Matt Duquette, an AFRL engineer.

AFRL has been clear that, for now, Skyborg could fit any number of different airframes. "Skyborg is not scheduled for any particular type of aircraft platform at this time," the laboratory stated.

But it's looking more and more like Skyborg and the XQ-58 are aligning, and by 2023 could produce a flexible wingman drone that can think on its own, to whatever degree its human flight-leader wants.