Soldiers Will Soon Have Cheap, Lightweight Drones Streaming Intel and Video Straight to Them on the Battlefield 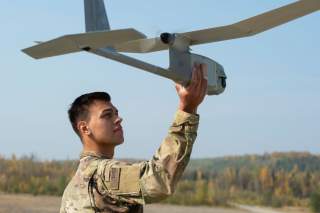 Key point: Soldiers will use the One System Remote Video Terminal to better understand in real-time what is happening during a war.

The Army and Textron Systems are developing a lightweight portable One System Remote Video Terminal (OSRVT) that allows dismounted soldiers to view real-time nearby drone video feeds using a modified frequency.OSRVTs have been in combat with the Army since 2007. They are integrated into vehicle platforms such as Stryker vehicles, allowing infantry to view feeds and control sensor payloads from nearby drones while on the move.

The laptop-like drone controllers are configured with an adapter kit so that they can operate from almost every Army vehicle. In fact, OSRVT software is hosted in the Army’s emerging Humvee replacement, the Joint Light Tactical Vehicle. Fielding of OSRVTs is currently 69 percent complete, Army officials said. This new technology allows soldiers such as dismounted infantry not in vehicles to view combat-relevant drone feeds while on foot.

Certain small, handheld Army drones, such as a Puma or Wasp, can be operated by dismounted soldiers. However, while quite useful in combat circumstances, they have a more limited range, endurance and sensing ability compared to larger, medium-altitude drones such as an Army Gray Eagle.

Other planned upgrades to the OSRVT configuration include a modified Ku-band Directional Antenna (KuDA) for mobile vehicle operations that will be ready this year and bi-directional technology by 2020. The Army plans to have additional communications security for the OSRVT in place by 2020 as well, Ary developers said.

The OSRVT system supports level of interoperability three (LOI3) via a KuDA; LOI3 allows the OSRVT user to control the sensor payload (except weapons) when allowed by the primary operator.

Upgrades to the OSRVT supports and improves the Army’s current combat-zone progress with “manned-unmanned teaming.” This technology, already deployed in combat in Afghanistan, allows Kiowa and Apache attack helicopter crews to view video feeds from nearby drones and control the sensor payload from the air.

The new technology is slated to be ready by 2020, Army developers said.

The radio, called RF-335, is designed to utilize wideband waveforms and a datalink to support full-motion video from nearby drones.

“In the past, someone on the ground would have a traditional comms radio and use an ISR receiver. This converges those capabilities into one platform by pulling down video from the air, cross-banding the video into a two-channel radio,” Dennis Moran, senior vice president at Harris, said last year.

The radio functions like existing software programmable radios, using high-bandwidth waveforms to network voice, video and data across the force in real time. Setting up an ad hoc terrestrial network, the radios are designed to function as a battlefield network in austere environments where there is no satellite connectivity or fixed infrastructure.

Harris is also building upon this radio technology with a RF-345 two-channel, vehicle or soldier-mounted man pack radio.

“We add filtering so we can operate those radios close together without interference,” Moran said.

This article originally appeared on Warrior Maven in early 2018.