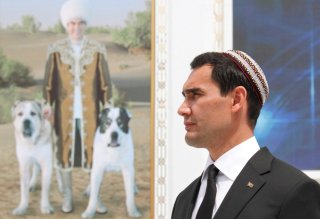 Turkmenistan’s electoral commission announced on Tuesday that Serdar Berdimuhamedow, the son of incumbent leader Gurbanguly Berdimuhamedow, had emerged victorious in the country’s elections on March 12. The younger Berdimuhamedow’s victory marked the creation of Central Asia’s first political dynasty since the region’s independence from the Soviet Union.

“In accordance with Article 76 of the Electoral Code of Turkmenistan and on the basis of a resolution of the Central Election Commission (CEC) of March 14, 2022, Deputy Chairman of the Cabinet of Ministers of Turkmenistan Serdar Gurbanguly Berdimuhamedow, who received 72.97% of the votes, was declared elected president of Turkmenistan”, the electoral commission claimed in a Russian-language statement posted to the Turkmenportal news site. The statement claimed that electoral turnout was 97.17 percent.

Outside observers have largely labeled Turkmenistan a dictatorship, and several have alleged that the election was a charade intended to legitimize the elder Berdimuhamedow’s transfer of power to his son. Turkmenistan’s political scene is dominated by the country’s Democratic Party, the successor to the Soviet-era Communist Party, which holds roughly half of the country’s parliamentary seats and has consistently won its presidential elections by overwhelming margins.

Once he takes office, the younger Berdimuhamedow will be the third ruler in Turkmenistan’s post-Soviet history. The country’s Soviet-era leader, Saparmurat Niyazov, retained power after the fall of the Soviet Union and ruled the country until his death in 2006. His successor was the elder Berdimuhamedow, who continued many of Niyazov’s policies and retained his elaborate cult of personality. The younger Berdimuhamedow, aged forty, previously served as a deputy provincial governor, deputy foreign minister, the leader of Turkmenistan’s state-run oil and gas company, and deputy prime minister.

In campaign statements, Berdimuhamedow indicated that he would continue many of his father’s policies, including the country’s neutrality in international affairs, while also working to expand the economy and raise the country’s standard of living.

Berdimuhamedow will be sworn into office on March 19.