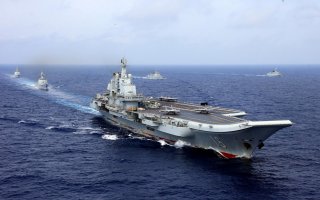 Now, the dispute has continued, and the Philippines are once again demanding the ships leave the area.

The number of ships in the region is now at 250, per the Associated Press. The Philippines government claims the presence of the ships is “hazardous to navigation and safety of life at sea,” in addition to threatening the Philippines’ sovereign rights.

Delfin Lorenzana, The Philippines’ Secretary of National Defense, had earlier this month stated that “we view with grave concern the presence of 220 Chinese militia boats in the Julian Felipe Reef (internationally known as Whitsun Reef, located within Union Reefs) in the West Philippine Sea,” and made both a diplomatic protest and a call. But China had ignored both, according to the Associated Press.

As of Wednesday, forty-four of the Chinese “maritime militia” vessels were moored at Whitsun Reef, while more than two hundred more had dispersed to other nearby areas in the Spratly group of islands. The Spratly Islands are one of the world’s most disputed territories, with numerous countries, including China, Taiwan, Malaysia, Vietnam, Brunei and the Philippines, staking claims to the islands.

There are also four Chinese naval ships at the Chinese-occupied Mischief Reef, which China controversially took control of in 1995.

“The Philippines calls on China to immediately withdraw these vessels flying its flag,” the National Task Force for the West Philippine Sea said in a statement cited by the Associated Press. "Neither the Philippines nor the international community will ever accept China's assertion of its so-called ‘indisputable integrated sovereignty’ over almost all of the South China Sea.”

The United States, meanwhile, has backed the Philippines in the dispute.

“We stand with the Philippines, our oldest treaty ally in Asia,” the U.S. embassy in Manila said in a statement this week, going on to accuse China of using its “maritime militia to intimidate, provoke, and threaten other nations, which undermines peace and security in the region.”

Days earlier, the same embassy had issued a statement and held a ceremony marking the seventy-fifth anniversary of the establishment of diplomatic relations between the United States and the Philippines. Relations were established in July of 1946, on the same day that the Philippines became an independent nation, following the end of World War II.

“Some say seventy-five years is indeed a long time to stay as friends, partners, and allies, but I believe this is an undeniable testament to the depth and quality of the bilateral relationship. Our ties have withstood the test of time and have served both our countries and peoples well,” Philippine Ambassador to the United States Jose Manuel Romualdez said during a program held on the grounds of the Philippine Embassy in Washington, DC.