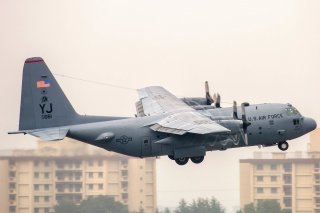 The Special Operations Command’s AC-130J Ghostrider gunship aircraft are set to test a truly ghostly new weapon: a phantasmal laser that can burn holes into targets from a distance without creating a sound or visible beam, nor leaving any evidence of the assailant.

On October 6, Lockheed Martin announced it had completed factory testing on the Airborne High Energy Laser (AHEL) and delivered it for flight testing. Earlier statements have made clear the Air Force Special Operations Command (AFSOC) intends to test AHEL in 2022, which if successful could lead to new research and the development, testing, and evaluation to create an operational capability. In July Lockheed Martin received an additional $12 million five-year contract for “technical services, integration, test and demonstration of AHEL system.”

It may be fun to imagine a brilliant beam of light lancing forth from the 1950s-era C-130 Hercules transportation airplane accompanied by an appropriate “pew-pew” sound. But, in fact, a large part of AHEL’s appeal to SOCOM is its utter lack of such pyrotechnics. It could be used to silently burn holes into equipment and vehicles, potentially causing them to combust without obvious cause and leaving the targeted party without any tell-tale munitions fragments with which to trace the strike back to its origins.

Today, the Pentagon plans to field a wide variety of laser weapons on air-, ground- and sea-based platforms in the 2020s. But the idea of fitting air-to-surface lasers to a gunship actually dates back decades, when the 100-kilowatt Advanced Tactical Laser (ATL) chemical oxygen-iodine laser with a range of ten to twenty kilometers was first tested in 1996 on a C-130 Hercules.

Early on, the idea that such a weapon enabled plausibly deniable attacks was openly cited as a selling point as well as a potentially ethically troubling capability. A 2007 presentation also touted ATL’s “ultra precision . . . speed of light engagement, reduced collateral damage, scalable effects.”

However, the ATL laser tipped the scales at six tons due to its chemical power system, which built up enormous heat requiring commensurately intensive cooling. Thus, the bulky system did not attract U.S. military orders despite undergoing multiple tests through 2009.

By contrast, the new AHEL laser is a sixty-kilowatt solid-state combined fiber laser and is thus dramatically lighter, more reliable and less burdened by thermal management issues. It’s in a similar power class to the HELIOS laser being deployed to U.S. Navy warships for missile defense purposes.

Special Operations Command began development of the system for the Ghostrider gunship in 2015, initially describing it as a directed energy weapon weighing “up to 5,000 pounds” that was primarily intended to help counter the growing surface-to-air missile threat.

Still, reducing the system’s size and weight and devising a sufficiently accurate beam-steering system to keep the jittery laser precisely on target while mounted on an aircraft moving at over a hundred miles per hour proved challenging. But funding shortfall rather than technical problems allegedly explain why the laser was not tested in 2020 as originally planned.

The AC-130J Ghostrider is the fourth generation of heavily armed gunship based on the four-engine C-130 Hercules cargo airplane. It replaced the second- and third-generation AC-130H Spectre and AC-130U Spooky retired in 2015 and 2019. Early AC-130As and AC-130Es debuted in the Vietnam War, searching for and destroying Viet Cong supply convoys at night, and circling over a combat zone for hours raining down torrents of cannon fire in support of ground forces.

Since then, the gunships have proven a preferred platform for performing long-endurance surveillance, targeted killings of insurgent leaders, and precision fire support missions in U.S. military interventions in Afghanistan, El Salvador, Grenada, Iraq, Libya, Panama, Somalia, Syria and likely beyond.

The Ghostrider model typically has a crew of nine and is based on the modernized and re-engined C-130J transport model. It retains a rapid-fire GAU-23A 30-millimeter cannon and massive 105-millimeter howitzer for armament, but Hercules gunships (also including AC-130W Stinger II and Marine KC-130J Harvester Hawks) are increasingly relying more and more on longer-range precision-guided weapons, like Griffin and Hellfire anti-tank missiles as well as GBU-39 Small Diameter Bombs and GBU-44/B Viperstrike and GBU-69 glide bombs.

Despite their demonstrated utility, gunships could prove difficult to employ against more capable adversaries as they are highly vulnerable even to man-portable surface-to-air missiles. Indeed, after an AC-130 was shot down during the 1991 Persian Gulf War, resulting in the loss of all fourteen crew, the Air Force began fitting more advanced self-defense systems to the gunship. Today, these gunships have sophisticated radar and infrared countermeasure systems that may help them evade a sporadic anti-air threat.

Admittedly, the sixty-kilowatt AHEL laser may not be able to burn through the skin of an incoming missile quickly enough to detonate its warhead or damage its engine, but it might more readily blind and destroy the sensitive seeker on a missile’s nose. Similar self-defense lasers are expected to enter service on Air Force fighters and even refueling tankers.

Deniable Destruction from the Sky

Despite the self-defense role ascribed to AHEL, the laser’s ostensibly secondary applications against surface targets have, rightly or wrongly, attracted far more interest. That’s because it’s usually quite difficult to discretely destroy or disable a material asset from the sky, but that’s precisely what a laser might do.

For example, a laser could melt tires or burn through the engine blocks of ground vehicles, denying mobility to hostile forces. With a suitable guidance system, that tactic could also be leveraged to relatively safely disable moving vehicles allowing for the capture of the occupants. The “scalability” of the effect is surely appealing for circumstances where its preferred to minimize lethal effects, or avoiding them altogether.

Other potentially high-value targets could be power generators and other energy infrastructures, communications systems, or valuable (and vulnerable) radars and infrared sensors.

Lasers could also be used to generate a thermal buildup causing fuel stores or munitions in a depot to combust—without leaving a trace of what triggered the fire/explosion in the first place.

Though the sixty-kilowatt laser likely lacks the power needed to burn down cruise missiles in a timely fashion, it could also conceivably be used to burn down drones without resorting to expending anti-aircraft missiles that cost hundreds of thousands of dollars each.

One target that should be legally ineligible would be human beings on foot. Using directed energy weapons capable of causing permanent injuries against humans is banned per the 1995 Protocol On Blinding Laser Weapons. That said, the protocol doesn’t appear to be observed all that scrupulously by all adherents.

Regardless, the laser’s anti-material capabilities obviously lend themselves to use in covert operations, including in “shadow wars” in which hostilities are not overtly declared. That opens a host of ethical issues, too, if plausibly deniable anti-material attacks become so convenient as to be widely employed. Additionally, it raises the question of under what threshold anti-material attacks risk inciting a deadly kinetic response.

However, even in a context of overt hostilities, there could be a benefit to stealthily degrading an adversary’s equipment in ways that remain undetectable until it is too late. Unfortunately, the C-130 platform’s relative vulnerability would constrain its use to contexts where there is only a limited anti-aircraft threat.