Spending Bill Saga: Here Is What Is in Store for the U.S. Navy 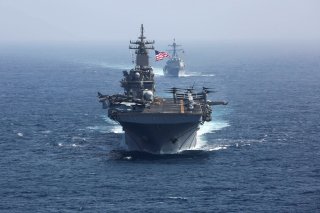 The Fiscal Year 2022 National Defense Authorization Act is slated to finance a slew of new Navy construction. In addition, it will give the military service a path forward with a few surprises.

The bill sets aside funding for three Arleigh Burke-class destroyers, one of the highly-anticipated Constellation-class frigates, and several other auxiliary salvage, rescue, resupply vessels and other ships.

The legislation stipulates that the Navy should purchase twelve more F/A-18E/F Super Hornets, the most advanced variant of the naval fighter, in order to “mitigate the Navy’s strike-fighter shortfall and bolster tactical fighter aircraft capacity.”

The Navy has previously stated that it wants nothing more to do with the fighter, explaining that the United States should shut down the Super Hornet line. The Navy believes that the Super Hornet wouldn’t be able to survive against threats they would likely face at the end of their service lives and instead would like to divert funds from the program into the Next Generation Air Dominance (NGAD) program, an initiative that would equip the Navy with a sixth-generation fighter jet.

Legislators are nixing the Navy’s ship retirement plans too. The Navy expressed a desire to retire seven Ticonderoga-class cruisers from service, though they will ultimately keep two and take just five off-line. Test from the legislation explains that the Navy can’t use any newly-authorized money “to retire, prepare to retire, inactivate, or place in storage more than five guided-missile cruisers,” though it remains unclear if they can choose which to retire and which to retain.

The cruisers made a splash recently when a think-tank hypothesized the Navy could leverage the cruiser’s robust anti-air defenses to protect the island of Guam by permanently stationing some cruisers around the island. Manned by a skeleton crew that would operate the ship’s air defenses, the cruisers could be an effective stop-gap air defense measure.

Additionally, the defense policy bill calls on the Navy to give an update on the Virginia-class submarine program, stipulating that the Secretary of the Navy has 120 days to do so after the bill becomes law.

Caleb Larson is a multimedia journalist and defense writer for the National Interest. A graduate of UCLA, he also holds a Master of Public Policy and lives in Berlin. He covers the intersection of conflict, security, and technology, focusing on American foreign policy, European security, and German society for both print and radio.