Spent Thousands On an 8K TV? Bad News: You Have Nothing to Watch 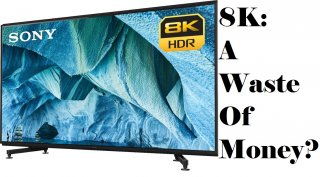 You may have recently spent a couple of grand on a 4K OLED TV, and you are thinking that life can’t get any better.

Then you switch over to a commercial that touts all of the amazing qualities of 8K TVs and all that you’re missing. Just like that, you’re down in the dumps. You ask yourself, “Is now the right time to go all-in on an 8K TV?”

The short answer is no.

At least for several more years, you should definitely be fine with your 4K TV. First off, there is a dearth of 8K content available. If your TV panel wants to show images in 8K, one would think that content should already be recorded in that resolution.

Here in the U.S., the pickings are pretty slim when it comes to 8K content. YouTube will have some 8K offerings, but they are mostly nature documentaries or what you would see in the TV display section at your local Best Buy. Video-streaming site Vimeo recently added support for 8K, and it now supposedly has more than 6,000 videos tagged as 8K.

Japan seems to be ahead of the curve when it comes to 8K content. In December 2017, the country’s NHK broadcast network launched a test channel dedicated to showing 8K content, and amid growing popularity now has made the channel permanent. The now-delayed Tokyo Summer Olympics would have been a major showcase for this technology, but we will have to wait another year to witness that.

However, fans of 8K really would like to see more film content released, instead of only short nature clips and one-off international sporting events. Interestingly, there have been several movies filmed in 8K, such as “Guardians of the Galaxy Vol. 2,” but this is far from becoming the standard in the film industry.

What is more challenging is the financial aspect of it, as it would cost thousands or millions more to purchase 8K-capable cameras and computers and storage systems that can handle such enormous data.

With this in mind, your 4K TV is good to go, but there could be one decent reason to not make you regret an 8K TV purchase. Samsung’s latest 8K TV offerings come with AI upscaling technology that can theoretically transform 4K content into 8K. By tapping into that AI tech, these TVs are adding in the “missing” pixels to make the content 8K.

It is surely a fascinating advancement, but upscaling will never be a substitute for the real thing. Until 8K content becomes more mainstream, you can bet that your 4K TV will continue to be an integral part of your family room for years to come.