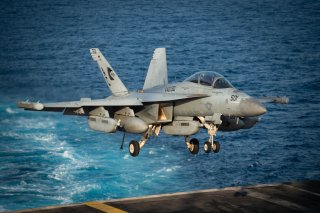 In a recently-released document covering fiscal year 2023 budgetary proposals, the U.S. Navy explained that it would like to decommission a large part of its EA-18G Growler aircraft fleet.

“Divestment involves decommissioning five Growler squadrons, collectively consisting of 25 airframes and approximately 1,020 associated officer and enlisted billets. Military end strength will be reduced by half in FY 2024 and fully in FY 2025. Associated aircraft will be placed in long-term preservation at the Aerospace Maintenance and Regeneration Group (AMARG). Half of the aircraft will be inducted in FY 2024 and the remainder in FY 2025.”

The Growler, long the Navy’s electronic warfare mainstay, will only operate aboard U.S. Navy carriers—not on land.

Interestingly, the Pentagon recently sent a small contingent of Growler aircraft to Germany in order to bolster NATO’s presence in the region. The Growlers, six aircraft in total, usually are stationed at Naval Air Station Whidbey Island, Washington, and will now be stationed at Spangdahlem Air Base in Germany.

The Growlers in Germany will be accompanied by a total of 240 aircrew, aircraft maintainers, and pilots. Notably, the deployment comes at a time of significantly increased tensions in Europe amid Russia’s invasion of Ukraine.

The Growler is a specialized variant of the F/A-18F Super Hornet, a two-seater jet airplane. The jet can complete a variety of missions but is optimized for an electronic warfare role. Thanks to an extensive suite of jamming sensors, Growlers fly primarily to suppress enemy air defenses.

At sea, the Growler has proven to be a commander favorite, so much so that aircraft carrier commanders appear to be mulling the decision to fly with extra Growlers. The pairing of advanced fifth-generation F-35 fighters with the fourth-generation Growlers allows for a unique team-up opportunity and leverages the older airplane’s powerful long-distance jamming capabilities.

Still, the rationale behind this decision remains, for the moment, opaque.