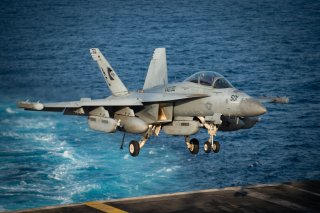 In light of renewed Russian aggression on NATO’s eastern flank, the United States is sending a small but significant contingent of Navy and Marine forces to Europe. In a Department of Defense press release, Pentagon press secretary John F. Kirby explained that a small contingent of American forces is being deployed to Germany.

“In coordination with the German government, six U.S Navy EA-18G Growler aircraft from VAQ-134 based at Naval Air Station Whidbey Island, Washington, are scheduled to arrive at Spangdahlem Air Base in Germany today,” Kirby said.

“The purpose of this deployment is to bolster readiness, enhance NATO's collective defense posture and further increase air integration capabilities with our allied and partner nations.”

The Growler is a specialized variant of the Hornet that is optimized for electronic warfare. “These Growlers are equipped for a variety of missions but they specialize in flying electronic warfare missions, using a suite of jamming sensors to confuse enemy radars, greatly aiding in the ability to conduct suppression of enemy air defense operations,” Kirby explained. Kirby added that the Growlers “will be accompanied by about 240 air crew, aircraft maintainers, and pilots.”

Reports from Ukraine indicate that Russia may be pulling its troops back from certain areas in Ukraine and consolidating its forces. Kirby cautioned, however, that Russia’s repositioning did not amount to a withdrawal or defeat. Still, Russian troops have struggled against a stiff and motivated Ukrainian resistance. Instead, analysts say, Russia’s future battlefield decisions could shift toward using massed fires from a distance against urban centers—a turn toward even more brutality.

Though the United States is moving to bolster its presence in Eastern Europe to reassure and protect NATO treaty allies, the deployment is not intended to confront Russia’s forces directly.

Kirby explained that the American forces being moved to Eastern Europe “are not being deployed to be used against Russian forces in Ukraine.”

“They are being deployed completely in keeping with our efforts to bolster NATO's deterrence and defense capabilities along that eastern flank. The deployment is not in response to a perceived threat or incident.”

Kirby added that “this deployment is a prudent decision to continue to reevaluate our force posture on NATO's eastern flank.”