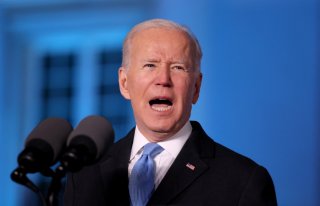 After President Joe Biden’s off-the-cuff statement last weekend that Vladimir Putin “cannot remain in power,” White House staff rushed to correct it. The president, they say, has followed a policy toward Ukraine over the last year that is consistent, coherent, balanced, and effective.

Unless dissent is patriotic only when Democrats are out of power, allow me to make a few observations.

First, as historian Robert Service noted in an interview with the Wall Street Journal, Biden nudged one step closer toward the impression of NATO membership for Ukraine last fall, via the U.S.-Ukrainian Charter on Strategic Partnership, while simultaneously failing to adequately prepare that country for its own defense. This might be described as a violation of International Politics 101: Never wound a king. John O’Sullivan warned at National Review on February 3that the United States was on track to provoke Putin without deterring him. O’Sullivan was right about that.

The point is not, as some would have it, that the United States is to blame for the Russian attack on Ukraine. That choice was Putin’s alone and must be counteracted. Putin’s actions aren’t simply a reactive measure based on a long-term pattern of NATO expansion. They flow from his more basic resentment at the collapse of Soviet power over thirty years ago. Unless we are supposed to help reconstruct Russia as one of the world’s two leading superpowers—an impossible and inadvisable task—there is little we can do to appease his frustration. But that doesn’t mean we can’t deter him through firm, effective U.S. policies. Unfortunately, Biden failed to do so.

Second, Biden has pursued a progressive agenda on climate change, the environment, and the U.S. oil and gas industry that is not only unwise on its own terms, but catastrophically so given the current crisis. It was Joe Biden who canceled the Keystone Pipeline energy project with Canada, a point of great pride for him, while giving a green light to Germany’s Nord Stream II pipeline with Russia. Think about that for a minute. This administration cracked down on U.S. energy cooperation with Canadians, while giving the okay to German gas imports from Putin’s Russia.

By simultaneously insisting over the past year that the Saudis must be critiqued on Yemen and human rights, Biden has boxed himself in. Now that he needs their oil, the Saudis won’t even take his calls.

Under current conditions, cutting off Russian oil and gas from international markets makes sense. But it makes no sense whatsoever to pursue a punitive approach toward North American oil and gas production while doing so. In fact, it never did. Nor does it make any kind of sense to cozy up to bitter U.S. adversaries in Iran and Venezuela as a way of addressing energy shortages. The obvious answer would be working with allies instead of adversaries to address those shortages—and unleash domestic production. This is long overdue.

Third, the desire on the part of the American public and (sometimes) President Biden to avoid undue escalation with Moscow is understandable. Any sensible approach would factor this in, looking to maintain peace at the great-power nuclear level. What a sensible approach would not do is continually signal to the Russians ahead of time exactly what the U.S. reservation point is on one issue of deterrence and coercive diplomacy after another. And yet this is exactly what Biden has done, again and again, including by Twitter. It’s like playing poker while continually showing your cards to the other players. It’s self-defeating, and naturally, Putin takes full advantage of it.

However, if you are the president of the United States, before announcing that some foreign head of state “cannot remain in power,” reflect on the American experience with international regime change over the past twenty years. Are you serious about such a change in this latest case, and if the answer is yes, how do you propose to do that in relation to a country measuring over six million square miles with thousands of nuclear weapons? Or will your staff have to walk that one back for you?

To be fair, Biden’s national security team has got some things right. The opening package of U.S. economic sanctions, diplomatic initiatives, deployments to eastern NATO, and weapons to Ukraine over the past month are welcome measures. Handheld anti-tank missiles, for example, have had a devastating effect on Russian armor. But supplies are running out. The administration needs to increase weapons shipments, boost U.S. defense spending significantly, completely overhaul U.S. oil and gas policy, and strengthen economic sanctions on Moscow. Some of this, Biden will do. Some of it, obviously not, when it contradicts liberal priorities.

Having said that, there really are limits to how far the United States should ramp up the pressure, even if the president doesn’t need to signal every such limit ahead of time. For instance, the idea has been raised of a no-fly zone enforced by NATO over Ukraine. Intelligent people can and do disagree on the subject, but I believe this would be going too far. Putin’s Russia is not Saddam Hussein’s Iraq. The risk of accidental escalation with a nuclear-armed major power would be unnecessarily high. Better to give the Ukrainians the means to build something like their own no-fly zone against the Russians. NATO should not be asked to enforce it.

This speaks to a point raised by Mac Owens in an excellent piece recently at American Greatness. As Owens says, surely considerations of prudence ought to be central when it comes to U.S. foreign policy. And as he is the first to note, prudence does not necessarily mean avoiding every possible form of conflict or tension with authoritarian aggressors overseas. Rather, prudence means striking the right balance, doing the right thing at the right time for the right reasons. In foreign policy, this means avoiding errors of strategic over-extension, as well as errors of under-extension. Liberal internationalists, through their legalistic, sermonizing approach to world affairs and discomfort with hard power, tend to make mistakes in both directions at the very same time.

The Biden administration will have to decide what exactly its desired endgame is in Ukraine. The president openly suggested, speaking in Poland, that the U.S. endgame is the end of the Putin regime; his staff declare it is not. The implications of this confusion could be deadly, and you better believe Putin is listening. He will not go down without a fight. If Biden is serious when he says that Russia’s current leader cannot remain in power, then of course a negotiated settlement is off the table, and there is no path to war termination other than Putin’s exit. If so, what is Biden’s plan to achieve it, short of the larger conflagration he seeks to avoid? I cannot see that he has one. He emotes. He emits. He does not strategize.

One alternative raised in Foreign Affairs by Wess Mitchell, assistant secretary of state for Europe and Eurasia during the first two years of the Trump administration, is that of “fortified neutrality.” Ukraine’s President Volodymyr Zelenskyy has already indicated he is ready to drop the idea of NATO membership. Fortified neutrality would clarify that Ukraine will not join NATO, but that the country’s independence is guaranteed by all parties—and that it is free to maintain flourishing diplomatic, economic, and political ties to the West. But as Mitchell suggests, this condition cannot and should not be decided without the Ukrainians. Zelenskyy has proven to be an impressive wartime leader, and his people have shown stunning courage and skill in forcefully defending their homeland. That, by the way, is nationalism—love of country, and a readiness to fight for it. Ukraine’s president has earned the right to decide for himself what peace terms he is willing to accept. He must not be pressured by the West into any concessions he finds intolerable. Nor, for that matter, should he be pressured to avoid any settlement he feels is in the best interests of his own country.

On a human level, you feel some sympathy for U.S. officials of any party who face what is really the most severe combination of geopolitical challenges to America’s position since the Cold War. Even as Putin looks to violently dismantle Ukraine, so China, North Korea, and Iran all consider how best to take advantage of this moment at America’s expense. We should pray this administration eventually gets it right. I mean that literally: the danger of deterrence breakdown and conflict on multiple fronts is now very real.

Unfortunately, all these challenges are unnecessarily aggravated by our current commander-in-chief. The problem is brutally simple, however painful it is to say it. Namely: foreign dictators do not fear Biden in the way that they should. Consistent with the twenty-first-century liberal format, he castigates and annoys them without creating intimidating deterrents. He oscillates between wild overstatement and perplexed incoherence. He is not, as was claimed two years ago, a great old foreign policy hand. His judgment, as former Defense Secretary Robert Gates once noted, is frequently wrong. Biden is a career politician and a party machine leader who has held high office in Washington, DC, for nearly half a century without leaving much impression of firm, enduring policy convictions on issues of national interest. As his party has drifted leftward, so has he. His self-appointed task, case by case, is mainly to defer to the wishes of his own liberal domestic coalition. A nice guy? Maybe. Most of his supporters seem to think so. But foreign autocrats licking their chops do not care, and the judgment of history can be pitiless.