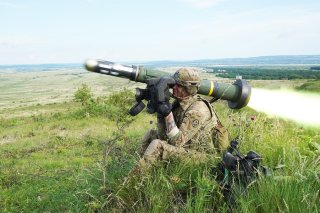 As Russian armored vehicles attempt to close in on Kyiv, Ukrainian defense forces are closing off key “intersections” and “choke points,” disabling or destroying Russian supply lines, and using Javelin anti-tank missiles to decimate Russian forces and halt their advance.

On February 28, CNN’s Mathew Chance described how a Russian column of armored vehicles had been destroyed during an attempt to cross a bridge. The video, which showcased fallen soldiers and burnt and destroyed Russian vehicles, shows a bridge with a very narrow point of entry that would make approaching forces an easy target. While the exact weapons used to destroy these vehicles may not be revealed for security reasons, the destruction of the vehicles may have been caused by Javelins, which have been used with great effect against tanks in the past. At the same time, it could certainly be possible that the armored vehicles were destroyed by artillery or missiles fired from helicopters or aircraft. Most artillery systems, however, are ill-suited to striking moving targets and often used as “area” weapons to destroy fixed assets and enable troops to maneuver under the cover of suppressive fire. While precision-guided artillery does exist now, and some emerging artillery weapons have shown an ability, during testing, to hit moving targets with laser-guidance systems, Ukrainian forces are not known to employ these advanced precision-artillery systems.

Given their numerical and technological inferiority, Ukrainian forces must manipulate terrain against the Russian military to achieve military successes on the battlefield. Such a strategy likely calls for ambushing or closing off chokepoints or passageways that are crucial to a Russian attack. Otherwise, a smaller number of even well-armed soldiers will find themselves quickly overwhelmed and unable to inflict serious damage upon an adversarial force that is using tanks or other heavy vehicles.

The concept of hitting “intersections and chokepoints” was described by a U.S. Army Infantry Task Force Commander who led units which destroyed the Iraqi Republican Guard near Baghdad Airport in 2003. Retired Lt. Col. Scott Rutter told The National Interest in an interview that, during his unit's attack on the Iraqi Republican Guard, enemy forces did have some marginal success trying to control or “shut down” intersections. At the beginning of the Russian invasion, Rutter told TNI he anticipated that Ukrainian forces would use these kinds of tactics to stop a Russian advance. He may have been correct, at least when it comes to what the CNN video shows.

While Rutter may have correctly anticipated Ukrainian tactics and strategies, he, like many others, may not have fully anticipated the rigor, tenacity, resolve and success of the Ukrainian resistance.

This phenomenon may prove to be of even greater significance should Russian forces close in on urban areas, as buildings and narrow streets, could offer Javelin-armed and dismounted units opportunities to attack armored vehicles from hidden or more “obscured” locations. While NATO countries may also be sending other weapons to the front, the U.S. Department of Defense has been clear that sending Javelins may prove to be a crucial factor in stopping Russian attacks and giving new life to Ukrainian fighters.