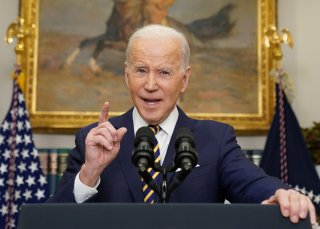 As Russia’s invasion of Ukraine entered its thirteenth day on Tuesday, President Joe Biden announced that the United States would ban the importation of Russian oil, gas, and coal, even as Americans are beset by rapidly rising energy prices. By “targeting the main artery of the Russian economy,” Biden said, “the American people will deal another powerful blow to [Russian president Vladimir] Putin’s war machine” and will “not be a part of subsidizing Putin’s war.”

Biden’s decision is only the latest U.S. salvo against the Russian economy, which has been assailed for nearly two weeks by rigorous international sanctions. Following Russia’s invasion of Ukraine, the United States and Europe moved expeditiously to expel a number of Russian banks from the SWIFT system, often referred to as the economic “nuclear option”; restrict transactions with the Russian Central Bank and freeze its assets; ban Russian flights from Western airspace; and create a Department of Justice task force to seize the assets of Russian oligarchs, among other moves. Already, the Russian ruble has lost 40 percent of its value against the dollar while interest rates have soared to 20 percent, forcing Moscow to impose capital controls and leading to long lines at Russian banks.

According to Axios, Russia is now the most sanctioned country in the world, surpassing even Iran, as countries the world over join the Western sanctions campaign in reaction to Ukraine’s plight. Yet thus far, Western sanctions, which Putin said were “akin to a declaration of war, have not stopped Moscow’s military march. As a result, frustration with Putin’s aggression has overcome Western reluctance to ban Russian energy exports—and the U.S. decision appears to be only the beginning. In fact, the United Kingdom quickly followed Biden’s lead by committing to stop importing Russian oil by the end of 2022, while European Union (EU) leaders revealed unprecedented plans to cut their imports of Russian natural gas by two-thirds within a year and to phase out their dependency on Russian coal and oil. This is a big step for the EU, which currently imports 45 percent of its gas, one-third of its oil, and almost half of its coal from Russia and has to balance the agendas of members as dissimilar as Germany and Hungary—both of which had rejected sanctioning Russian energy exports just this week. However, much as Putin’s adventurism has united Ukraine, it has also marshaled European will. “We must become independent from Russian oil, coal and gas,” European Commission president Ursula von der Leyen declared. “We simply cannot rely on a supplier who explicitly threatens us.”

Of course, it is not just Europe that will have to weather the fallout of excising Russia from the global economy. The United States had already been struggling with inflation rates not seen in four decades and decade-high gas prices before Biden’s decision to ban Russian energy imports, which is supported by seven in ten Americans. Now, despite buying just 8 percent of its oil from Russia, Biden is warning of further disruption to the U.S. economy. “Since Putin began his military buildup on Ukrainian borders, the price of gas at the pump in America went up $0.75, and with this action, it’s going to go up further,” Biden said. “I’m going to do everything I can to minimize Putin’s price hike here at home,” he declared, promising to join thirty other countries in releasing 60 million barrels of oil from strategic petroleum reserves and to “secure a reliable supply of global energy.”

Biden’s commitment to supplanting Russian energy production has provoked a flurry of recent diplomacy between the United States and several oil-producing nations, including Qatar, Saudi Arabia, Venezuela, and Iran. For instance, on January 31, 2022, Biden met with Qatari emir Sheikh Tamim bin Hamad al-Thani at the White House, and the two leaders discussed whether Qatari liquified natural gas (LNG) could be supplied to Europe if Russia curtails its energy exports. Although amenable to Biden’s request, Al-Thani also noted that Doha alone could not meet European energy demand—especially since it has prior obligations to buyers in Asia. “Gas doesn’t work the same way that oil does,” Geoffrey Kemp, senior director for Regional Security Programs at the Center for the National Interest, told me. “Oil can be sold on the spot, anywhere, anytime. It can be transferred at sea or carried on the back of mules. Gas can’t.” High transportation and logistical costs make LNG transactions complicated, Kemp says, and thus, “Long-term contracts are the only way that you can really market the product from both the buyer’s and the seller’s point of view.” Given that industry analysts estimate that only 8-10 percent of Qatar’s LNG is eligible for diversion to Europe, and that Doha has not yet initiated discussions with its Asian buyers to make additional gas available, it is evident that Qatar will not be bailing the West out of its energy crisis.

Biden has also turned to Saudi Arabia, a U.S. ally and the world’s second-largest oil producer, in a bid to have the kingdom increase its oil production. However, the Saudis are not playing ball; they remember how Biden campaigned on making them a “pariah” and spoke of the need to “recalibrate” the U.S.-Saudi relationship following Crown Prince Mohammad bin Salman’s (MBS) murder of journalist Jamal Khashoggi and civilians in Yemen. To be sure, upon taking office, Biden intentionally sidestepped MBS, who has been the kingdom’s de facto leader since June 2017, by only engaging with his father, King Salman. MBS has not forgotten this slight, and although he knows that his country still needs the United States, he also appreciates his kingdom’s leverage over international oil markets. “The Saudis are the swing producer of oil,” Gil Barndollar, a senior research fellow at Catholic University of America’s Center for the Study of Statesmanship, explained. “Until we are all off of fossil fuels—and even then, the very last barrel of oil pumped out of the ground will be Saudi oil because their cost of extraction is so cheap—the Saudis are always going to matter. They will always have a substantial say in world economic affairs.”

Certainly, Washington’s relations with Riyadh remain important, even if they are not what they once were. President Donald Trump’s willingness to cultivate close ties with the Saudis produced more receptivity in Riyadh during his administration: the Saudis both increased their oil output in October 2018 and then slashed production in April 2020 in response to U.S. preferences. Yet today, sentiment in Riyadh is fluctuating between animosity and aloofness. “We have a long, historical relationship with America. Our aim is to keep it and strengthen it,” MBS told The Atlantic’s Graeme Wood on March 3, 2022. But when asked to opine on his relationship with Biden, the crown prince replied that “Simply, I do not care.” Thus, if Biden soon travels to Riyadh to solicit additional Saudi oil production, he may leave disappointed. Indeed, judging by the outcome of his February 9, 2022, phone call with King Salman, where the king chose solidarity with OPEC+ over the United States, and recent statements by OPEC+ officials that the bloc’s policies have “nothing to do with the supply (production) shortfall,” Biden’s latest entreaty may also flop.

This brings us to Venezuela, a stalwart U.S. adversary who has strong relations with Russia and has long been vexed by U.S. economic sanctions. There is no love lost between the United States and the government of Nicolás Maduro, but the Biden White House’s engagement may be eased by the fact that Trump, and not Biden, sought regime change in Caracas and enacted the sanctions that Maduro now wants lifted. Consequently, in talks this week with the United States, Caracas signaled its enthusiasm for rapprochement and increasing oil production, and subsequently released two imprisoned American citizens. But reaching an agreement will be easier said than done. Biden is already facing a deluge of bipartisan criticism over engaging with a “murderous” regime, and will need results to see it through.

Negotiations with Iran on the Joint Comprehensive Plan of Action (JCPOA) were already convoluted before Russia invaded Ukraine, but the subsequent collapse in U.S.-Russia relations has created additional hurdles. On March 5, Russian officials insisted that the United States provide guarantees that Western sanctions would not hinder its trade with Iran after the JCPOA is restored, and U.S. secretary of state Antony Blinken’s rejoinder that U.S. sanctions on Russia “have nothing to do” with Iran or the JCPOA has not dislodged them. Russia’s position makes sense. According to Iran’s oil minister, if Tehran and Washington reenter the JCPOA and U.S. sanctions are lifted, Iran will reach its maximum oil production capacity within one to two months. Considering that Iran has the world’s fourth-largest oil reserves, additional Iranian production could help stabilize the oil market and reduce prices, thereby diminishing Moscow’s income while also capturing some of Russia’s lost market share. While Russia has not pulled out of the talks over this outcome—Russia remains interested in preventing Iran from attaining nuclear weapons—Moscow is also counting on an unshackled Iran to buy Russian weapons and sign various commercial and security agreements. With all parties feeling eager to conclude negotiations, it may only be a matter of time before oil markets receive some needed good news.