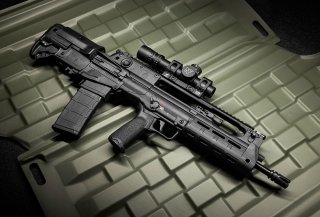 While Springfield Armory is among the notable firearms manufacturers that won't be at this week's Shooting, Hunting, Outdoor Trade Show in Las Vegas, that doesn't mean the company has held back on new product introductions.

Springfield Armory announced the newly released Hellion last week. The Hellion is a new bullpup platform chambered in 5.56x45mm NATO (.223 Remington). It has already been generating buzz for its modular and ambidextrous layout.

Not everyone is sold on the bullpup system, but it does offer some notable benefits. Unlike most traditional long guns, bullpups locate the action and the magazine behind the trigger and into the buttstock area. The design dramatically reduces the overall length of the weapon while still allowing the firearm to retain a barrel long enough for effective downrange performance.

Despite being considered a "modern" design, bullpups have been time-tested. The Hellion is based on the internationally proven VHS-2 bullpup, which has been employed by the Croatian armed forces in demanding environments around the world such as Iraq and Africa. The Springfield Armory Hellion provides American shooters a semi-automatic version of this combat-proven firearm.

To develop the Hellion for the American market, Springfield Armory adapted the original VHS-2 design, including its ability to feed from AR-pattern magazines, replaceable AR-pattern pistol grips, M-Lok slots in the handguard, and the addition of six quick detach mounts. The new semi-automatic bullpup also features a reversible ejection system that requires no additional parts or tools. In addition, the Hellion offers a set of fully ambidextrous controls, including the safety, charging handle, magazine and bolt release, resulting in an ultra-compact 5.56mm that can be fired from either shoulder. Despite its small overall length, it still houses a hammer forged sixteen-inch barrel with 1:7-inch rate of twist.

Springfield Armory also touts the fact that the Hellion is highly adaptable for shooters. This includes the use of a five-position collapsible buttstock as well as a two-position adjustable gas system. The Hellion is also ready to accept a variety of optics on the top strip of Picatinny rail, which also integrates a set of flip-up iron sights. It was also designed to feed from AR-pattern magazines.

The Hellion, which is available now at select retailers, comes with a thirty-round Magpul PMAG and Bravo Company USA BCMGUNFIGHTER Mod 3 pistol grip. MSRP is $1,999.