SR-71 Spy Plane: Still the Fastest Plane on Earth (But a Nightmare to Get Airborne) 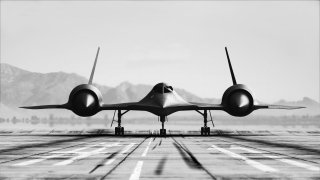 The SR-71 was fast but fussy — getting the Blackbird into the sky took hours of preparation. Once it was airborne though, it set world records which stand today.

The SR-71 was designed for speed — and quick it was. In the aftermath of Gary Powers being shot down over the Soviet Union in a U2 spy plane, Lockheed’s Skunk Works division was charged with designing a plane that could fly in the 90,000 feet altitude range, and be fast enough to be essentially untouchable by Soviet surface-to-air missiles.

At the drawing board, Skunk Works realized they needed something special. Flying as fast as was intended — over 2,000 miles per hour — would generate an enormous amount of heat, and put incredible stress on the airframe.

Titanium was settled upon as the airframe material because it was stronger than the usual aircraft-grade aluminum, and not as heavy as steel — but there was a problem.

The usual steel tooling used for aircraft manufacturing was unsuitable for titanium manufacture. Stronger titanium tooling would be needed to manufacture a titanium plane. But titanium was in short supply in the United States.

At the time, the Soviet Union was the world’s largest producer of titanium, so front companies were created by the Central Intelligence Agency to purchase ore that could be refined into titanium.

Over the course of the SR-71 lifetime, 12 Blackbirds were damaged or lost due to accidents, though no aircraft were ever shot down.

Peter Merlin, an aviation historian described how much of an effort was required to get the SR-71 into the air. “It took an army of people to prepare the aircraft. A Blackbird operational mission essentially had a countdown, like a space mission did, because there was so much preparation involved in both getting the crew ready and the vehicle ready, an unbelievable amount of effort and manpower.”

Despite the pain in getting the Blackbird into the air, once it was, it set world records. It remains the world’s fastest, highest-flying air-breathing aircraft. In 1976, the Blackbird reached an altitude of 85,069 feet, and a top speed of Mach 3.3 — although one pilot involved in the 1986 bombing of Libya said that he flew in excess of Mach 3.6. Either way — incredibly fast.

In addition to the exotic materials that were used to build the SR-71, some composite materials were also used. In part due to the unfamiliarity with these building materials, there were some notable accidents.

In 1987, an SR-71 was on a mission over the Baltic Sea, when it experienced a loss of power due to an engine explosion. Rapidly losing altitude, the Blackbird turned towards Sweden in order to find a place to safely land. In doing so, the SR-71 violated Swedish airspace, and a pair of Viggen fighters were scrambled to investigate the situation.

When it became clear that the SR-71 was in danger of crashing, it was escorted towards Denmark and allowed to land, where it was later repaired and flown back to the United States. This interview with the pilot for a Swedish TV show is worth a look.

Although the SR-71 was retired in the late 1990s, its speed provided a capability that satellites cannot provide. Stay tuned to hear about the SR-72 that is in the works.